[Here we can observe how the Jewish garbage and scum won’t leave a white woman alone. The Jews continue to harrass her at every opportunity. On the plus side, it is because Alison has done excellent work for our race (and the whole world in fact), by telling the truth. It shows you what kind of low life garbage they are. They will hound, harrass and make life hell for a lone white woman who dared to tell the truth about them and their despicable actions. It is almost like when the Jews cornered David Irving in court with Lipstadt, and the Jews gave her $30 million with which to fight David Irving. The Jews as a global group will GANG UP on a SINGLE WHITE PERSON to destroy that person. That should show you how jumpy they are about their mass of enormous LIES!

Below is the latest from Alison’s blog on how the Jews are putting out all sorts of reports about her. Rest assured the Jewish filth are up to no good with regard to Alison. Jan]

An article online published last Thursday by despicable Zionist rag, UK Jewish News, claims I am again under police investigation. The flurry of emails to my inbox from all over the world – Canada, Australia, the US, France as well as Britain – leads me to write a general update here rather than keep repeating myself in replies to those devoted to the Revisionist Cause.

Above: ‘Hate singer’ – but nevertheless an ‘artist’

The information within the article is somewhat confused, with three possible sources of reports to Derbyshire Constabulary, including the Probation Service. I could be mistaken, but surely the Probation Service would have informed me if they intended to report me to police for a breach of my suspended sentence order? No doubt the other two sources – Jewish News and Campaign Against Anti-Semitism (CAA) – have reported me and probably thought that was enough to go ahead and publish. We saw the exact same modus operandum from CAA back in 2015 after my quenelle salute. 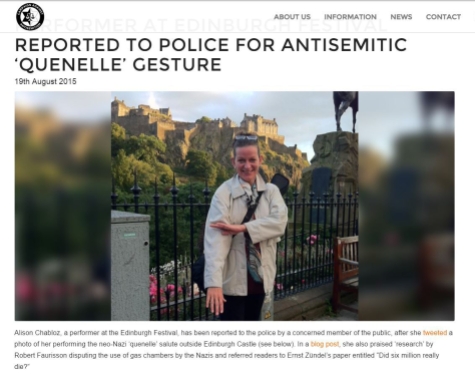 Above: CAA ‘press release’ which two days later was republished by the Times of Israel. No UK mainstream outlet took up the story, with the exception of Louise Mensch in The Sun (article deleted) and in The Jewish Chronicle. As the BBC recently discovered, sensationalising police investigations can be very costly indeed.

The above CAA press release appeared on August 19th 2015, two days after my quenelle shot was fished from my Twitter timeline and broadly advertised, offering my ‘full details’:

Above: Ambrosine Shitrit advertises my quenelle salute, which led to the above CAA press release, Times of Israel article, Louise Mensch’s smear pieces and finally my prosecution and conviction three years later for singing satirical songs about the ‘Holocaust’ and Jewish power. NB Shitrit had already managed to have me sacked from my job as music manager with AIDA cruises and had been involved in sending anonymous postal deliveries to my home address – all ignored by Derbyshire Constabulary.

On the same day back in August 2015 as CAA’s press release, my Twitter timeline began to be trolled by two anonymous trolls, Bedlam Jones and Nemo:

Both the above anonymous accounts have since been outed in court as working for CAA, as confirmed within the pages of this website. Yet I was still convicted! After my 2016 EdFringe show was pulled for ‘political reasons’, these two then-anonymous accounts were under investigation by Derbyshire police. Two months later – a week before the CAA private prosecution against my song (((Survivors))) was listed – I was informed by police that their investigation into this anonymous stalking and harassment of my professional life was closed.

The Jewish News article as well as a photograph published on Twitter by CAA ally and political editor, Jack Mendel, which appears to suggest I am being followed have been sent to my solicitor.

At my recent meeting with probation, I presented screenshots of the above CAA trolls’ most recent tweets about me, as well as screenshots of CAA’s newest honourary patron, pointing out that this person was sitting next to my accusers in court on the day of my sentencing: 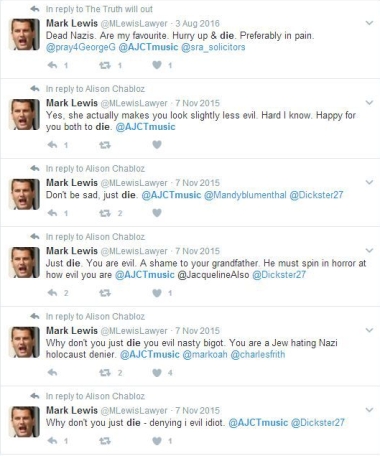 Above: an example of CAA honourary patron Mark Lewis’ charm and eloquence. Police did nothing in this case either. One can only deduce that police are now in a position where they are no longer able to do what they are supposed to do.

The most eyebrow-raising factor in all this is that my accusers have complained bitterly from the start that I must at all costs be silenced, clamped in irons and left to rot. Their fear of Chabloz is such that they even managed to have the judge impose a restraining order. Yet, here they are, as usual, trawling my every statement, tweeting my work and further publicising my case. Will they ever stop?

Thank you for your support. Wishing everyone a happy, healthy and relaxed weekend.

Map: How immigrants in America are sending $120 BILLION to their struggling families back home – My Analysis

A Quick Summary of The 4 Laws of Politics for Whites

Black American idiots who want separatism from the USA … My Thoughts

The EVIL JEWISH SPLC: Not all Hate is Equal – It stops monitoring Black hate groups

Video: Canada: Ontario Premier & his cohorts are totally out of control – Arresting people…

Photo: NICE: WHITE NFL player Cole Beasley vows not to take Covid-19 jab even if he has to RETIRE

S.African workers with vaccine side effects to get paid sick leave – no medical certificate required

Video: Science: Lesson for Whites: What 100 Million years of Evolution really teaches you…

The unethical history of Big Pharma, and why they can’t be trusted on anything

Video: Science: No one can figure out how eels have sex