[I have a soft spot for Trump, especially since he's been under intense attack. All my American friends had assured me he would be elected for a second term. I hope this is not itself deceptive propaganda from the academics. When Trump goes … what is left? There's nothing at all as far as I can see. He might not be much, but he is a figurehead that the Jews, Liberals and communists hate. So if he goes, what then? And, as we said all year, as I and others have said, COVID and lockdown is a trick to destroy Trump by the Jews … and maybe that is finally working despite evidence that the statistics are inflated. Jan]

President Trump’s support among Republicans and other conservative voters has begun to erode amid the continued coronavirus pandemic and its associated economic havoc, a new poll from UC Berkeley’s Institute of Governmental Studies shows.

The poll shows Trump far behind Joe Biden, the presumptive Democratic nominee, in California. That’s no surprise — even at his strongest Trump was unlikely ever to be competitive in California, a heavily Democratic state.

What is notable, however, is the size of the gap and the degree to which approval of Trump’s work as president has declined among groups that until now have supported him.

Biden leads Trump in California by 39 percentage points, 67% to 28%, the poll found. That’s 9 points larger than the margin by which Hillary Clinton beat Trump statewide in 2016 — a record at the time. And the share of Californians who approve of Trump’s performance in office, which has held steady in the mid-to-low 30% range for nearly his entire tenure, has now ticked downward to just 29%.

That’s consistent with other polls nationally and in battleground states that show a nationwide tide lifting Biden, swelling his margin in states like California, moving him solidly ahead in close-fought states like Pennsylvania and Michigan and making him potentially competitive in states that Trump won more handily last time, such as Texas and Georgia.

“There was a question of whether his support was already so low in the state that it couldn’t go lower,” said Berkeley political scientist Eric Schickler, co-director of the Institute of Governmental Studies. The poll “shows the answer is no.”

Aides to both candidates believe the biggest factor in Trump’s decline is voters’ fear of the coronavirus and belief that the administration has botched its handling of the pandemic. The poll provides further evidence of that.

The poll also found California Democrats reacting favorably to the possibility of Biden choosing either of two state officeholders on his short list of potential running mates.

Democratic voters in Los Angeles County were more likely than those elsewhere in the state to have an opinion of Bass, who represents parts of the Westside and Central Los Angeles in Congress. They favored her selection 56% to 11%. Opinions of Harris, who lives in Los Angeles but spent most of her career in the Bay Area, were roughly the same in Los Angeles as statewide.

For Harris, the support marked a notable comeback. In December, a Berkeley IGS poll conducted for the Los Angeles Times showed that by 61% to 24%, likely Democratic primary voters in California thought she should quit the presidential race. She did so just before the poll was published.

Opinions of Trump, by contrast, have gotten worse since the winter. A Berkeley IGS poll in January showed 33% of the state’s voters approved of the way he is handling his job as president. In the most recent poll, that’s dropped to 29%, with 71% disapproving, including 63% who say they “strongly” disapprove.

Since the vast majority of Democrats already disapproved of Trump, the drop in approval comes mostly among Republicans and nonpartisan voters. Among voters who identified themselves as moderate conservatives, for example, approval dropped 11 points, from 76% in January to 65% now.

Erosion of Trump’s support among moderate conservatives is another trend seen nationwide in recent surveys.

“There’s evidence nationally of a decline for Trump in more rural areas where the coronavirus has spread,” Schickler said. The poll seems to be “showing a similar thing here.”

About 15% of voters have an unfavorable view of both candidates. That group supports Biden by 5 to 1. That’s a big shift from 2016, when voters nationwide who disliked both candidates broke heavily in Trump’s favor.

Biden has a huge lead in the state not only because Democrats heavily outnumber Republicans in California, but also because the former vice president has a big lead among non-partisan voters and has made inroads among traditionally Republican groups while Trump has almost no traction among traditionally Democratic groups.

The state’s nonpartisan voters back Biden by about 4 to 1, the poll found.

About 15% of Latinos who primarily speak Spanish remain undecided, the poll found. That’s consistent with past elections in which Spanish-dominant Latinos, many of whom are relatively new citizens, have tended to tune in to the election later than many other voters. The group tends to be heavily Democratic, suggesting that Biden’s support from them is likely to grow as the election nears.

In liberal California, even white men without college educations — Trump’s strong point nationwide — back Biden. The former vice president leads among that group 54% to 42%, the poll found. That pales compared to Biden’s support among college-educated women, however. They back him 79% to 17%.

Evangelical Christians, who are among Trump’s most steadfast backers nationwide, form one of the few major demographic groups in the state that gives majority support to the president. California voters who say they are evangelicals back Trump 56% to 39%, the poll found.

Trump, who has pitched multiple campaign appeals to racial prejudice, also gets strong support from the roughly 30% of the state’s voters who disapprove of the Black Lives Matter movement. Those who disapprove of the movement back Trump over Biden 83% to 11%, the poll found. The much larger group that approves of the movement backs Biden 93% to 3%. 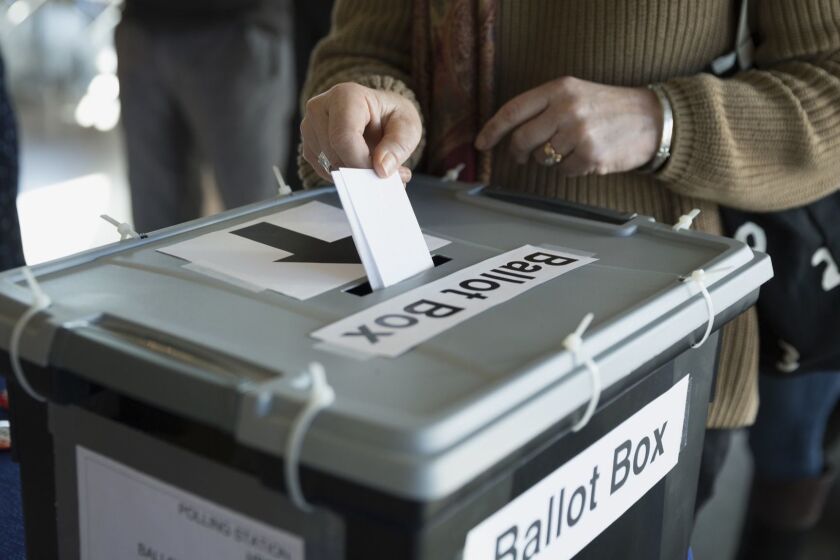 How the Berkeley IGS poll is done

The Berkeley IGS poll, supervised by pollster Mark DiCamillo, was administered online in English and Spanish from July 21-27 among 8,328 registered voters, 6,756 of whom are considered likely to vote in the November election. The margin of error for the full sample is estimated at roughly 2 percentage points in either direction. Further details on the poll questions and data can be found at the Berkeley IGS website.

Africa is only 6% vaccinated, and covid has practically disappeared… scientists baffled

12th December 2021 jlamprecht Comments Off on Africa is only 6% vaccinated, and covid has practically disappeared… scientists baffled

16th February 2021 jlamprecht Comments Off on Video: Incredible: (European) Tanks: How (Portuguese) Brazil Beat the Abrams, the Osório – My Comments

Are Jews & Ramaphosa trying lockdown for whites for MONTHS?

11th April 2020 jlamprecht Comments Off on Are Jews & Ramaphosa trying lockdown for whites for MONTHS?

Finally, I replied to most messages…

7th December 2020 jlamprecht Comments Off on Finally, I replied to most messages…

EXCELLENT: S.Africa: defence budget falling to only .86% of GDP – My Comments

19th May 2021 jlamprecht Comments Off on EXCELLENT: S.Africa: defence budget falling to only .86% of GDP – My Comments

US election 2020: What legal challenges is Trump planning?

18th November 2020 jlamprecht Comments Off on US election 2020: What legal challenges is Trump planning?

There is only ONE TRUE JEWISH SCIENCE: The Art of Manipulation and Bullsh*t

Religions only for Whites: The NAZIS, a Germanic Religion; Ben Klassen’s Creativity and Dr Pierce’s religion

The Amazing Bravery of the Pagans, especially Roman Gladiators

Massive electricity price hike on the cards for South Africa

Video: 2021 political naughty list: Who is waking up to coal this Christmas?

Trump: I was right about EVERYTHING…

12 Signs that food shortages are already here – My Comments

Jews Vs the US Military in Korea and Vietnam: MacArthur wanted to Nuke China

Monthly Donation reminder… I do need YOUR support…

The Portuguese in Africa: Decolonization: Portugal let down the Children of its empire – My Comments