[Notice how Jewish Liberalism and Jewish Communism always end up on the same side. There's so much hypocrisy in all this Jewish crap. Jan]

So MLB is fine with ball games in Cuba

and training in China

, but Georgia is the human-rights problem

You could tell that the Major League Baseball (MLB) decision to pull its All-Star game out of Atlanta was a deeply unpopular one, based on the ambivalent reaction of far-left failed gubernatorial candidate, Stacey Abrams.

After all, isn’t she the one who pushed through most of the fraud-enabling laws on the books in Georgia which triggered the recent legislative action? The blacks-are-too-dumb-to-have-voter-ID idiotic notion, so by extension, nobody should have to show voter ID to vote, even though everyone needs to show ID to buy a beer at a MLB ball game, or buy a ticket to one? She needs to make up her mind.

So which is it? Not wanting to see families hurt, or being all-in for the boycott of Atlanta, which certainly should affect the city tax base? She wants to have it both ways, boycott but nobody hurt. That’s because unlike MLB, she wants to win public office, and knows that screwing over black businesses, which will get it in the teeth with this MLB maneuver, is going to make her unpopular. 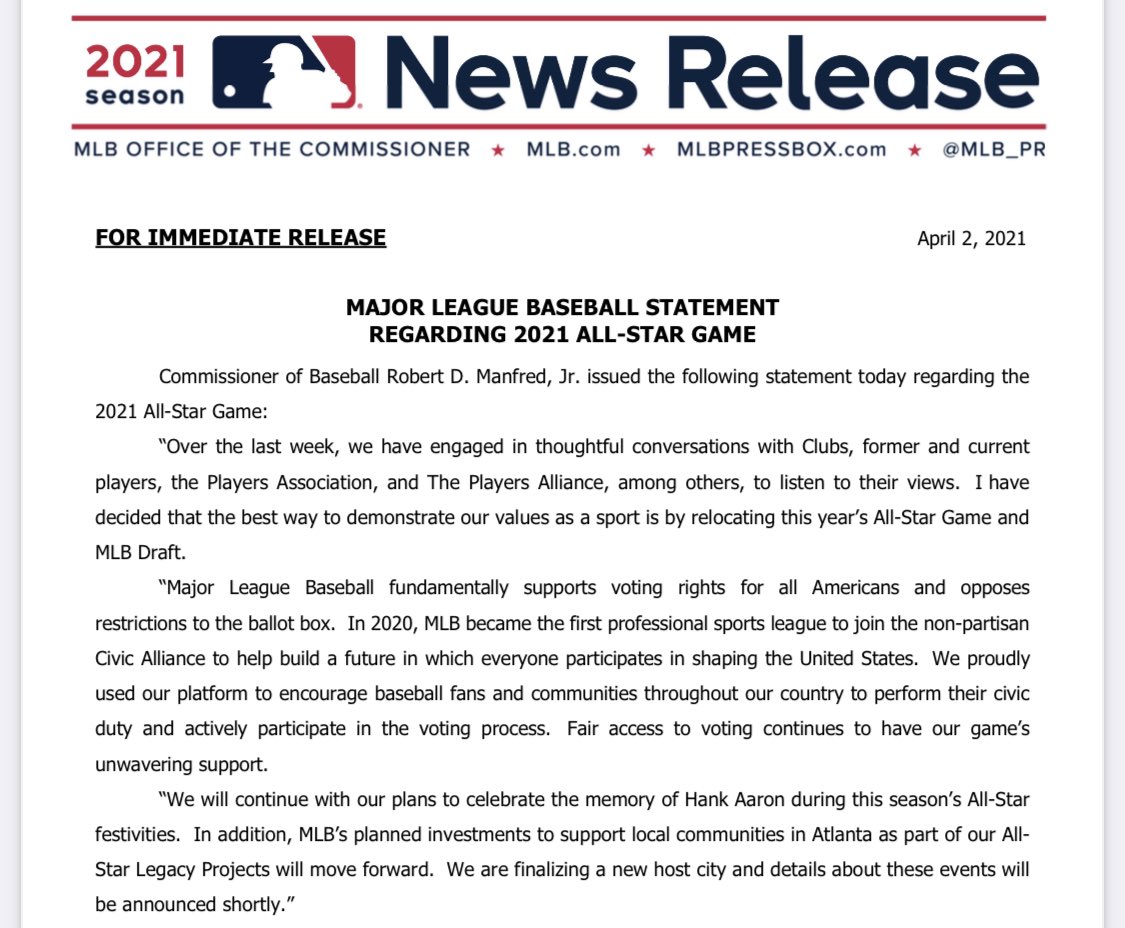 Abrams’s response is just the tip of the iceberg of the hypocrisy and contradictions seen from this MLB maneuver — stiffing black-owned American small businesses just emerging from a pandemic to protest a U.S. law they are perfectly free to campaign for to change otherwise through elections, or else playing the ball game without politics and drawing a big audience. Which is it for them? And by the way, how many of their baseball players are American citizens?

Unlike Abrams, they chose, and chose poorly, because what they chose will probably have some consequences for the MLB organization, given its nuclear level of hypocrisy.

Here’s another hypocrisy: Will MLB now move its All-Star game to Delaware, Joe Biden’s home state, where, unlike Georgia now, there is no early voting at all? Will they stop advertising and selling merchandise in that state? Or New York, or New Jersey, which also don’t have early voting as they now do in Georgia? These MLB virtue-signallers would be hypocrites if they didn’t.

Here’s the big one: MLB made a big deal about its move out of Georgia being a human rights issue, and them [sic] being all concerned about human rights, you see.

Can they explain for us why they recently held a ball game in brutal totalitarian military dictatorship of Cuba? A place Cuban ball players flee from to freedom, which in come cases includes MLB salaries made possible only by living in a free, democratic society that exists already? They aren’t fleeing to a hellhole, which is what MLB is now claiming about Georgia.

Can they explain to us why they hold a training camp in China, home of the Uighur slave-labor laogai and the broken-treaty de-democratization of Hong Kong? You’d think an organization that concerned about voting rights that willing to disrupt its own business and make itself politically unpopular in Georgia in the interest of virtue-signalling on voting might just take an interest in voting and transparency practices over in communist China.

These things to them are fine, but Georgia is an affront to their delicate democratic sensibilities.

The hypocrisies pile up on top of the hypocrisies and the only people who suffer here are the little black-owned Atlanta businesses who otherwise would get an increased payday from all the knock-on traffic from the All-Star game. Big businesses, such as MLB, have always been happy to crush the little-guy upstart businesses, some of whom might grow into competitors. That, and the press releases with fawning media coverage, is all they end up doing as a means of feathering their nests. Leftists have always yelled about calling corporations persons, and in this case, they are right, corporations are not persons making personal decisions, they are a big ‘it’ whose decisions are always in the end about profits.

Their hypocrisy surrounding this maneuver to appease senile Joe Biden and all his leftist flying monkeys circling his his sorry corpus is an outrage. Maybe a full boycott from viewers, as President Trump, who always has his finger on the pulse of the people, is what it will take to get that message to this big ‘it’ which wants to have things all ways.

Pic: WHITES AT WORK! Don’t mess with us when we’re busy creating!

How White-Shop is going: How shops go that Whites create for whites…

5th May 2020 jlamprecht No Comments

Advice from a Reader: Motto for Whites about Jews… – Also: My Advice on Antisemitism

From Canada: Defund the Left!

South Africa’s economy contracts the most in a century! – My Analysis

Video: Hyperinflation is Already Here – You Just Haven’t Realised It Yet.

Photos: IMPORTANT: WAR: US Green Berets are training the Mozambique army to take on a growing insurgency linked to ISIS

Video: America is burning again: Race Riots are back … AFTER TRUMP – My Comments

Hitler believed in God: Intelligent Design, the Hand of God … but Atheism is DEAD RIGHT