[Bezos has got Jewish links though he himself, it appears is not Jewish. I don't trust any of these buggers. Jan]

Back in February 2020, the Amazon CEO broke a California record with his purchase of the Warner estate, a piece of Hollywood history belonging to billionaire David Geffen. The $165 million sale was the most expensive home sale in state history.

Then, last July, Bezos appeared to make another purchase, this time right next door: a $10 million home that shares a hedge line with the Warner estate. According to property records viewed by both Variety and Daily Mail, Bezos became the new owner of the 1930s-era home on a side street in Beverly Hills’ Benedict Canyon neighborhood.

A spokesperson for Amazon did not respond to Business Insider’s request for comment on the sale.

While there are few photos of the estate and the adjacent home, Los Angeles County has plenty of aerial views of the property that give us our best look yet at the massive compound Bezos is amassing in the hills above LA.

The Warner estate was built by Jack Warner, the cofounder and onetime president of Warner Bros., in 1937. Warner began with three acres of what used to be farmland, and slowly but surely, added parcels of adjacent land. He also built out the grounds of the estate, adding a golf course and two ponds. 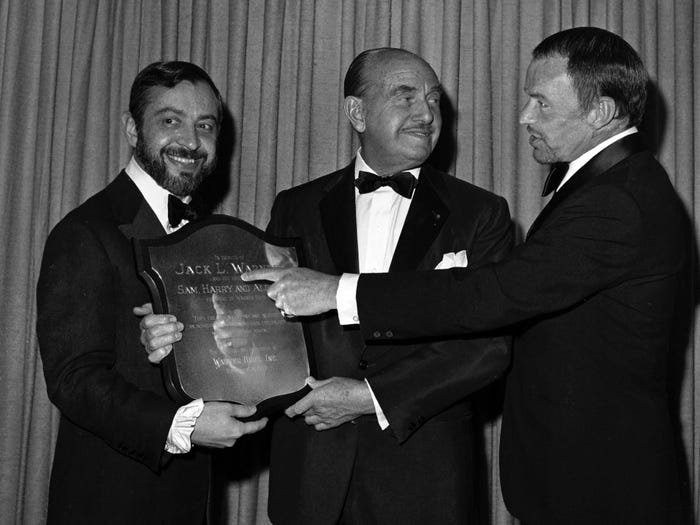 Warner liked to throw extravagant parties that were attended by stars like Olivia de Havilland and Jimmy Stewart and moguls like Howard Hughes. An invitation to a party at the estate was apparently one of the most sought-after in Hollywood in the late 1930s and early ’40s. 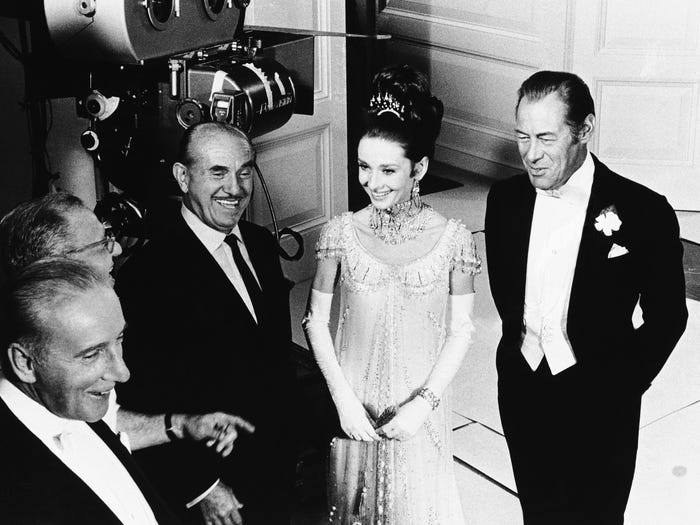 Warner filled the estate with expensive art, including a portrait of his wife, Ann, painted by Salvador Dali. 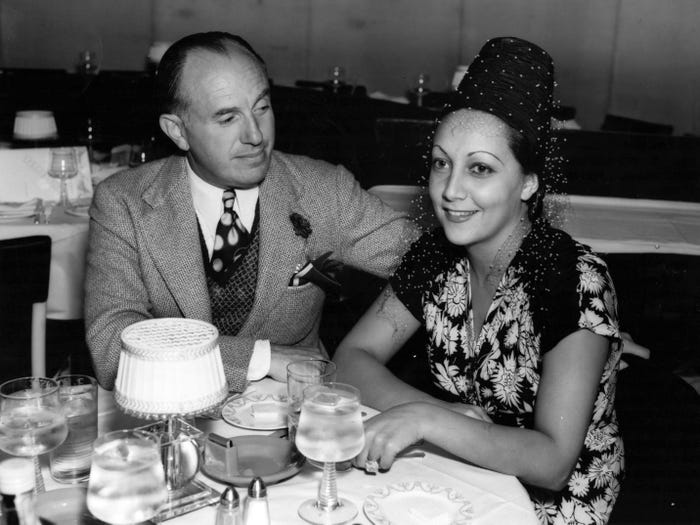 Warner died in 1978, and Ann Warner owned the house until she died in 1990. That year, the music and movie tycoon David Geffen bought the whole estate, including the art, for $47.5 million, according to Forbes. The sale set a record at the time. 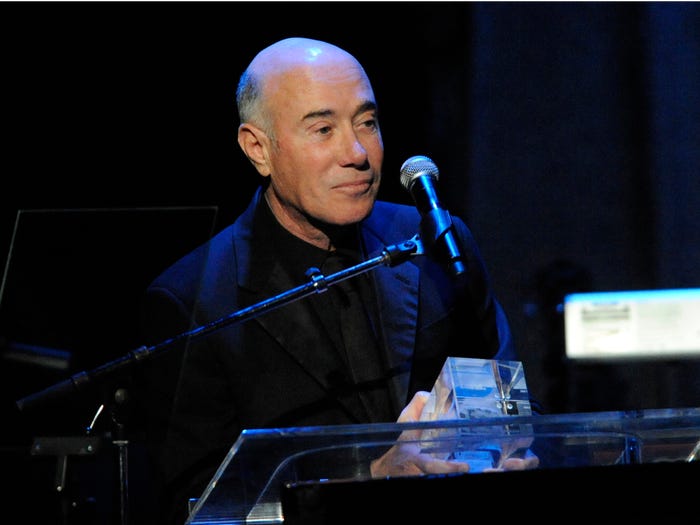 Geffen, who is worth an estimated $9 billion, has a multimillion-dollar real-estate portfolio that includes homes in Malibu, California, and in New York’s East Hampton, and Manhattan. 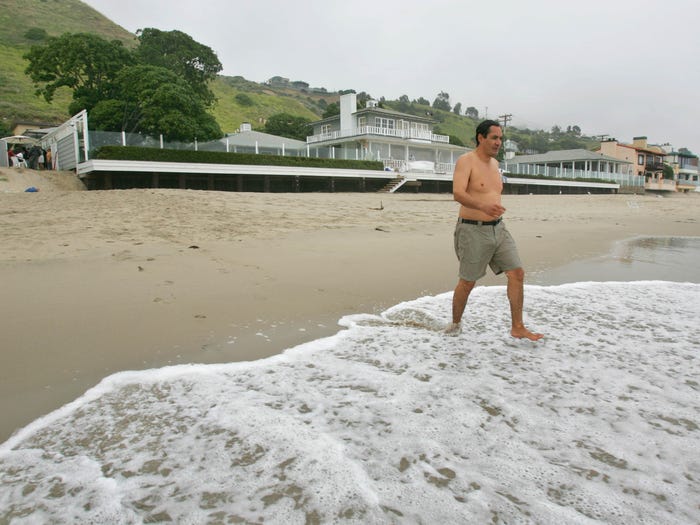 A man on the beach outside David Geffen’s Malibu, California, home. Reed Saxon/AP

Geffen is also the owner of a $590 million superyacht called the Rising Sun, where he frequently hosts fellow moguls and celebrities like Oprah Winfrey, Leonardo DiCaprio, Bradley Cooper, Barack and Michelle Obama — and Jeff Bezos. 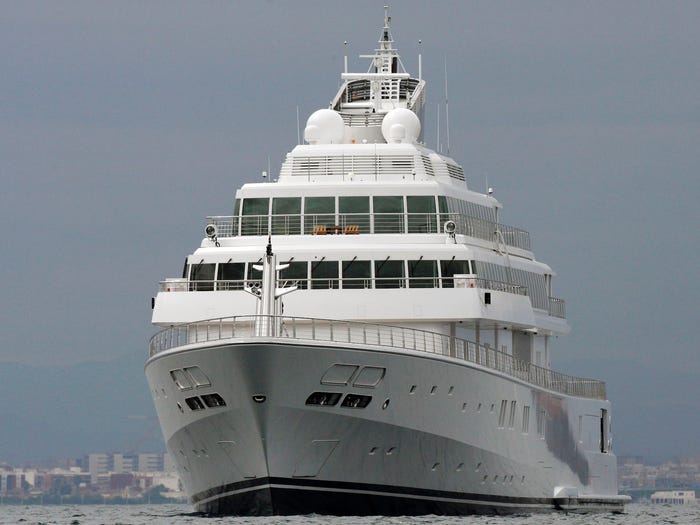 Bezos has vacationed aboard the yacht near the Balearic Islands off the coast of Spain. Last year, he was pictured on the deck of the yacht alongside former Goldman Sachs CEO Lloyd Blankfein, model Karlie Kloss, and investor Josh Kushner.

In February 2020, Bezos became the new owner of the Warner estate, according to The Wall Street Journal. The Journal reported that Bezos purchased the property for $165 million, making it the most expensive home sale in California history. No brokers were involved in the sale, according to The Journal. 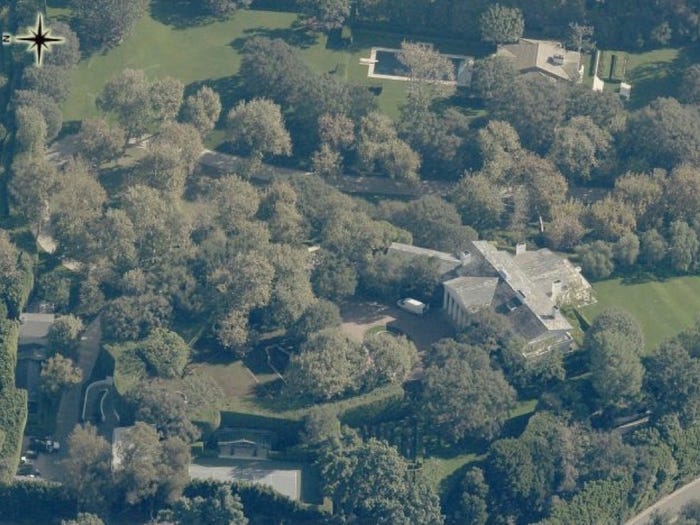 Bezos and his girlfriend, Lauren Sanchez, had been house hunting in Los Angeles and touring mansions throughout the area in previous weeks, the New York Post reported. 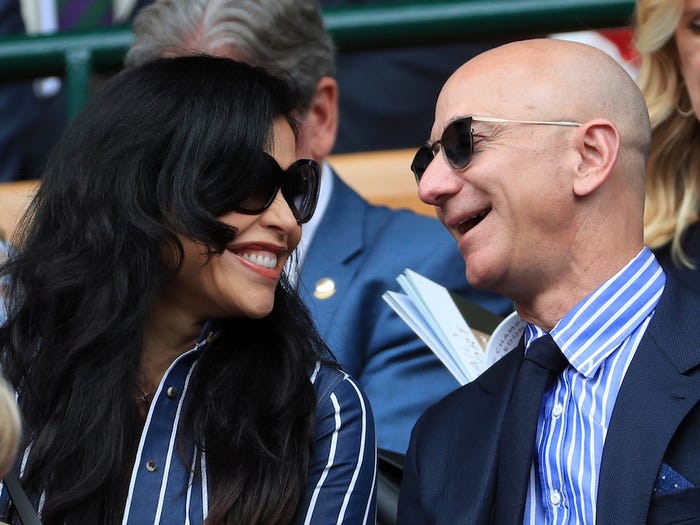 The Warner estate spans eight acres and is situated in the Benedict Canyon neighborhood of Beverly Hills. 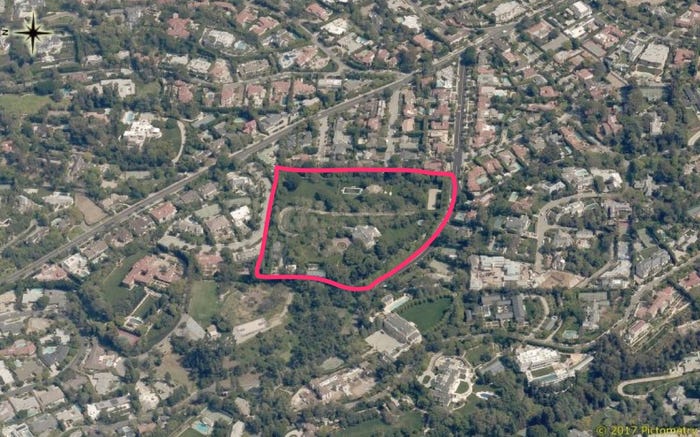 The estate promises the utmost privacy. It’s surrounded by tall hedges, blocked off by a large gate, and completely hidden from view from the street. 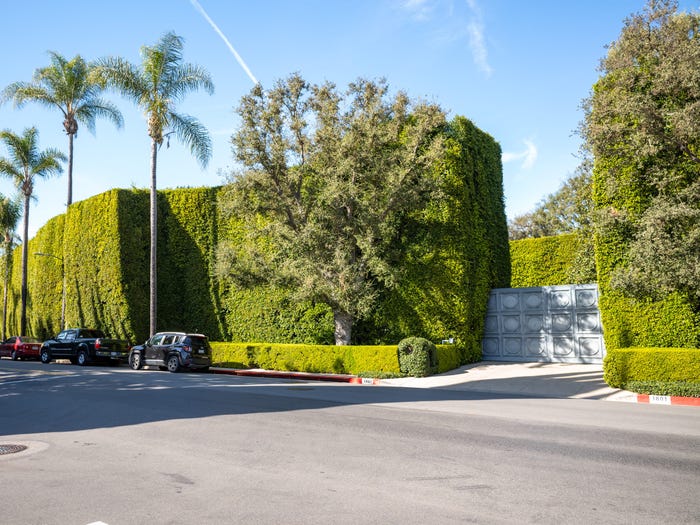 The Warner estate when viewed from Angelo Drive. RB/Bauer-Griffin/GC Images

The compound is home to multiple dwellings, including two guesthouses and a 13,600-square-foot mansion. 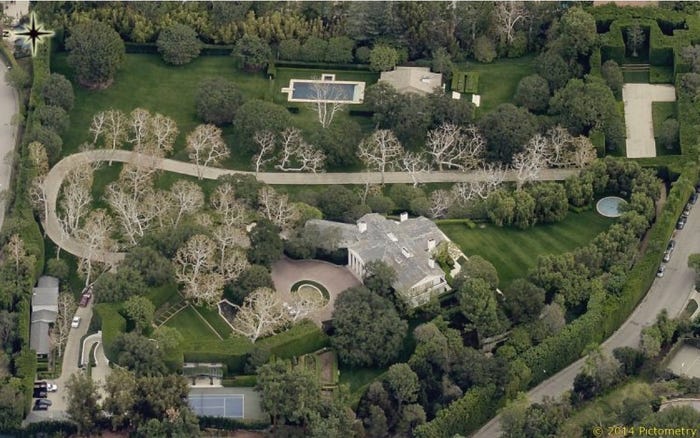 The Georgian-style home has eight bedrooms and nine bathrooms. It includes a floor that was once owned by Napoleon, according to The Journal. 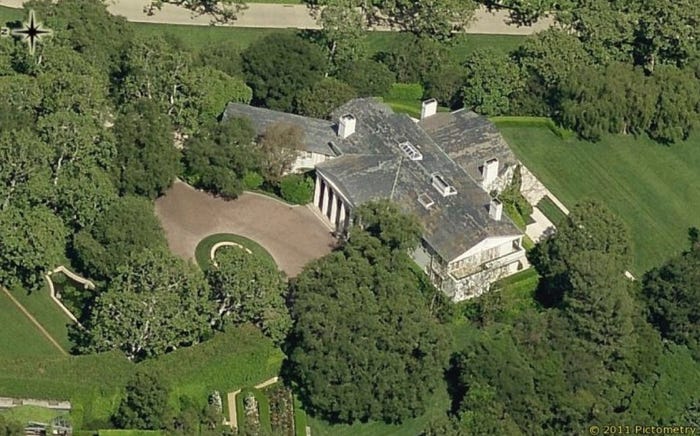 Photos shot of the interior of the estate by Architectural Digest in the early ’90s show a screening room, an expansive bar, and a dining room that could easily fit 14 guests. 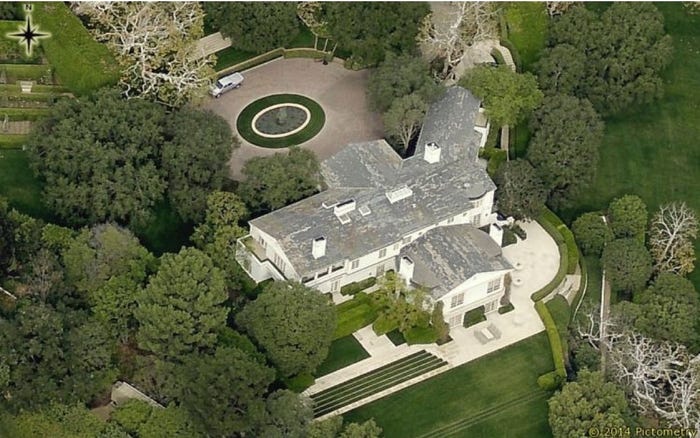 The grounds also include a tennis court and manicured gardens. Geffen spent $45 million renovating the property, including $20 million on landscaping alone, The Journal reported. 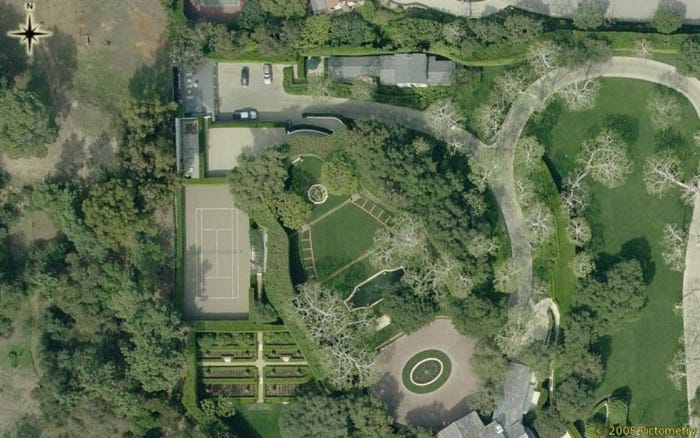 There’s a large pool and what appears to be an adjacent hot tub outside one of the large guesthouses. 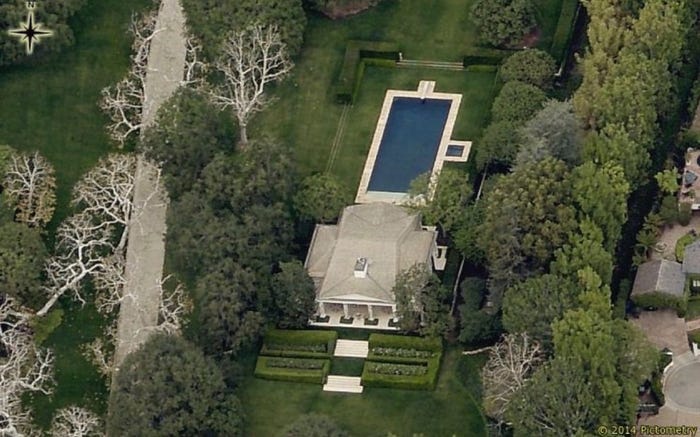 At one point, the property also included a nine-hole golf course and a "motor court" with a garage and gas pumps, according to Architectural Digest, though it’s not clear if those amenities are still on the property. 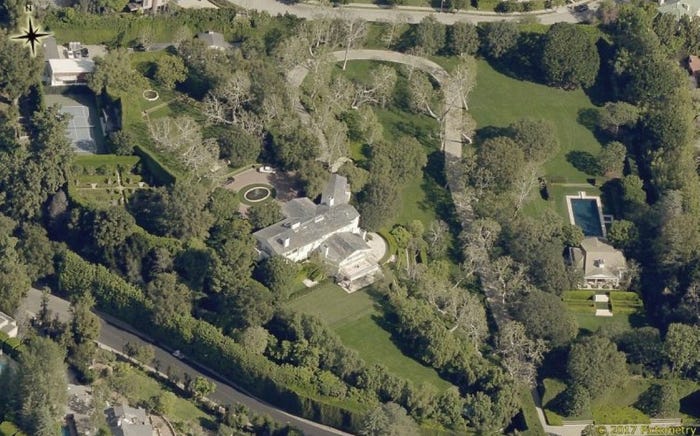 Bezos reportedly bought an adjacent property in July for $10 million. That property is on Tropical Avenue, which is perpendicular to the Warner estate. It shares a hedge with the compound, though it is currently accessed from a different street. 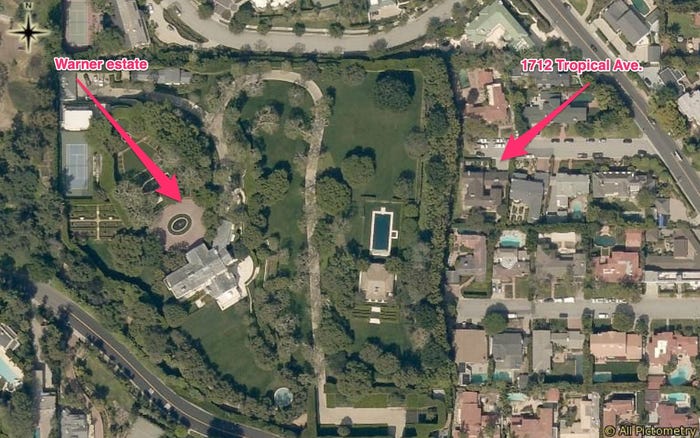 That adjacent property was built in 1930 and was last sold for $5.45 million, according to Variety. It features three bedrooms and five bathrooms, six fireplaces, a rear patio, and rose and vegetable gardens. 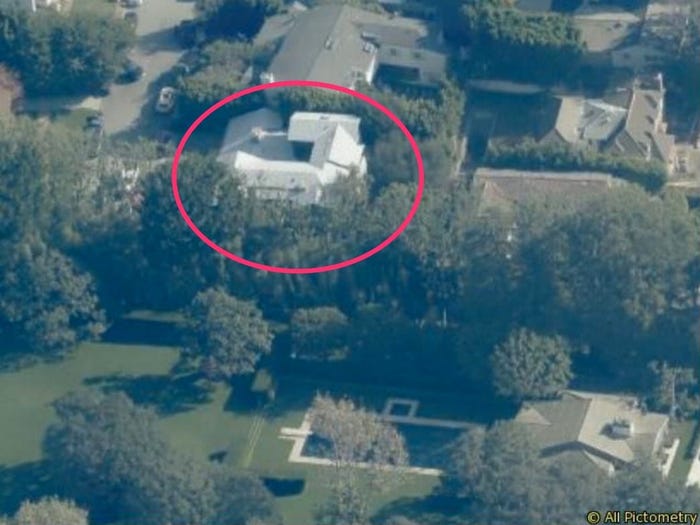 It’s not clear what Bezos would want with an adjacent property, but he has a history of snapping up homes near his larger estates. In 2017, he bought the house next door to his previous Beverly Hills mansion for $12.9 million. His ex-wife, MacKenzie Scott, was granted both homes in the couple’s divorce. 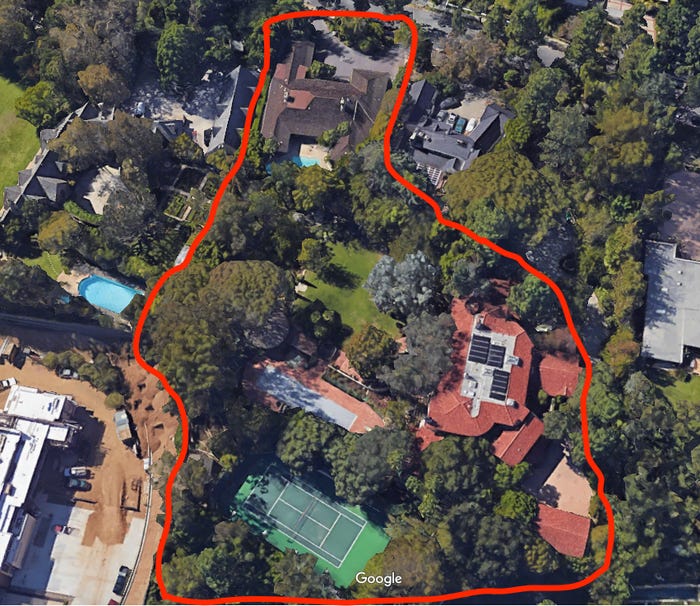 WARNING: The Allow-Space malware is back… – A Jewish signature?

Black Lives Matter launched a petition Monday calling on California Gov. Gavin Newsom to appoint a Black woman to fill the U.S. Senate seat to be vacated by Kamala Harris

What would happen to America if blacks disappeared?

F*ck stupid Communist China: Hypersonic Missiles For All US Destroyers? – My Comments

Thank you COVID! – The Post Pandemic World will be … NATIONALIST

EXCELLENT: From the Reverend Matt Hale, in jail: Why I did what I did…

NO FREE LUNCH FOR WHITES: We’re Europeans … NOT CRY BABIES!!!

Video: Excellent info from US Nurse on weird “COVID injuries”

EXCELLENT: From Germany: Important: COVID, Bill Gates the Criminal – The Puppets in Parliaments

IMPORTANT: Someone is busy with junk propaganda: TORTURED BABY CORPSES COME TO SURFACE DURING EUROPEAN FLOODS

How Long Do the Vaccinated Have to Live?

Australians censorship of Whites- How bad is it in the West?

IMPORTANT: UK: Where is Alison Chabloz who went to jail?

S.Africa: Zuma Riots: Over a 1.5 million rounds of ammunition looted from Durban container