[Nordlux Bellator in Bulgaria sent me these comments. I also asked him to explain the term "slav" because I believe its not fully "real". Jan]

”There are 3 giant linguistic groups among whites Slavs, Teutons and Romans”

I must remind you that ;

A/there is no such thing such ”slavs” not like tribal group anyway.

B/ The Cyrillic script was developed in First Bulgarian empire

The Cyrillic script (/sɪˈrɪlɪk/) is a writing system used for various languages across Eurasia and is used as the national script in various Slavic, Turkic, Mongolic and Iranic-speaking countries in Eastern Europe, the Caucasus, Central Asia and Northern Asia.

In the 9th century AD the Bulgarian Tsar Simeon I the Great, following the cultural and political course of his father Boris I, commissioned a new script, the Early Cyrillic alphabet, to be made at the Preslav Literary School in the First Bulgarian Empire, which would replace the Glagolitic script, produced earlier by Saints Cyril and Methodius and the same disciples that created the new Slavic script in Bulgaria. The usage of the Cyrillic script in Bulgaria was made official in 893.[3][4][5] The new script became the basis of alphabets used in various languages, especially those of Orthodox Slavic origin, and non-Slavic languages influenced by Russian. For centuries Cyrillic was used by Catholic and Muslim Slavs too (see Bosnian Cyrillic). As of 2019, around 250 million people in Eurasia use it as the official alphabet for their national languages, with Russia accounting for about half of them.[6] With the accession of Bulgaria to the European Union on 1 January 2007, Cyrillic became the third official script of the European Union, following Latin and Greek.[7]

c/ Old ”church slavonic” is the politically corect name for Old Bulgarian and this was the basis for russian,serbian and so on. 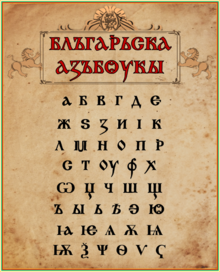 Old Bulgarian was the first literary period in the development of the language. It was a highly synthetic language with a rich declension system as attested by a number of manuscripts from the late 10th and the early 11th centuries. Those originate mostly from the Preslav and the Ohrid Literary School, although smaller literary centers also contributed to the tradition. The language became a medium for rich scholarly activity — chiefly in the late 9th and the early 10th century — with writers such as Constantine of Preslav, John Exarch, Clement of Ohrid, Chernorizetz Hrabar and Naum of Preslav (Naum of Ohrid). Most of their works are preserved through later copies, many of which are from neighboring Balkan countries or Russia.

Quote from the evil Jew Henry Kissinger on World Government

Eric Hunt: Bold Jewish bullshitting liar Elie Wiesel lied in a US court & got away with it!

WE NEED A WHITE REVOLUTION IN EUROPE! – Europe is on the brink of a working class revolution against globalist governments

EXCELLENT: A Jewish Traitor in South Africa has died! One less bloody Jew!

1st May 2020 jlamprecht No Comments

AWESOME: German Intelligence: NAZI’s increase by 30% in 2019: Is there a ‘Nazi emergency’ in the German city of Dresden? – My Comments

5th May 2020 jlamprecht No Comments

Jews admit they will be behind: White Americans paying Reparations for slavery & 150 years of RACISM! – My Comments

AUDIO: The next BIG (Jewish) SCAM to hit White Americans: Reparations for Slavery … this time is REAL & coming…

PDF: English translation from Bulgarian: No one has died from the coronavirus Important revelations shared by Dr Stoian Alexov, President of the Bulgarian Pathology Association

When Australians fought Germans … and they made peace…

IMPORTANT: No one has died from the coronavirus: From Dr Stoian Alexov, President of the Bulgarian Pathology Association – My Comments

Modern White men are raised to feel & think like WOMEN …

BREAKING NEWS: Latvia Wants US Troops, And Is Ready To Pay For Them – My Comments

Jews have got Americans very Afraid … Britain & Europe are even worse…

THE SHOCKING WEAKNESS OF CAPITALISM: Patreon to donate $50,000 to Black Lives matter….

This Israeli Tech Company Is Spying on the Upper Echelons of the US Government – Why?

From an Attorney: proposed 28th amendment to the US Constitution