[Some wild stuff that happened, and I'm curious to monitor what happens. Jan] 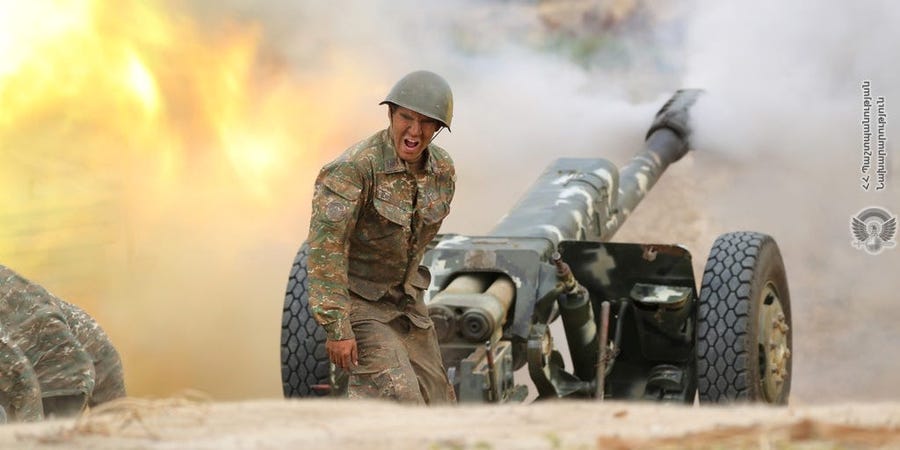 An ethnic Armenian soldier fires an artillery piece during fighting with Azerbaijan’s forces in the breakaway region of Nagorno-Karabakh, September 29, 2020. Defense Ministry of Armenia/via REUTERS

Armenia and Azerbaijan agreed to a ceasefire starting on Saturday after two weeks of brutal fighting that killed hundreds of people and displaced thousands more.

The deal agreed in Moscow did not make a clear how long the ceasefire was due to hold for and there were reports of continued fighting in the mountainous Nagorno-Karabakh region, according to Reuters.

Armenia and Azerbaijan have been embroiled in a decades-long conflict.

Nagorno-Karabakh lies in Azerbaijan but its 140,000 population is mostly ethnic Armenians and it has been under the control of Armenian forces since the end of a separatist war in 1994.

The recent clashes marked the biggest escalation since the 1990s.

Scroll down to see 13 photos of what happened in the region.

Armenia and Azerbaijan have agreed to a ceasefire starting on Saturday after two weeks of fighting for control over the Nagorno-Karabakh region. 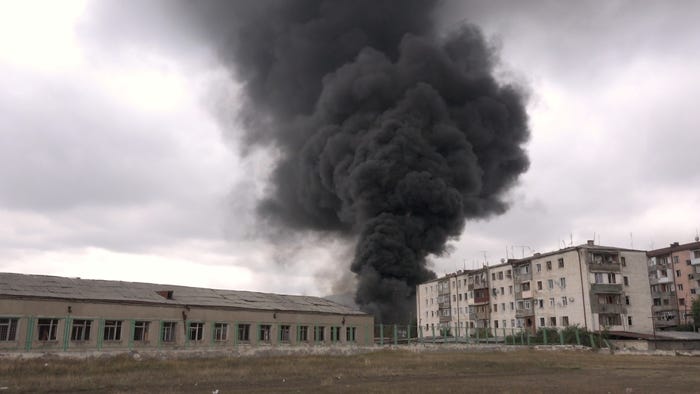 Black smoke rises near buildings during a military conflict over the breakaway region of Nagorno-Karabakh on October 4, 2020. Reuters

Clashes between Azerbaijani and Armenian forces in the region started up on September 27.

Nagorno-Karabakh is a remote mountainous region within Azerbaijan which has been under the control of ethnic Armenian forces for over fifteen years after becoming autonomous during the Soviet era. 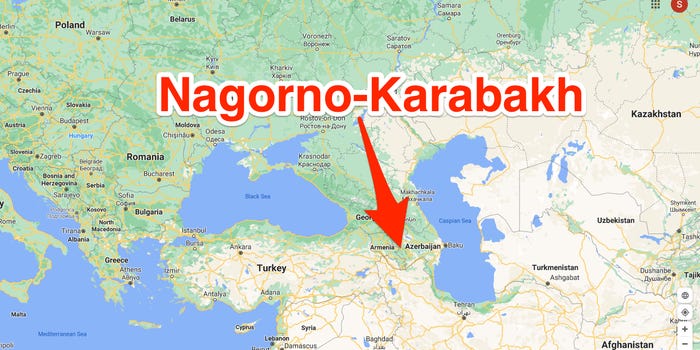 Nagorno-Karabakh is located in the Caucasus, a mountainous region jammed between Turkey, Russia, and Iran. Google Maps

For centuries, both Christians and Muslims, have fought for power over Nagorno-Karabakh.

While the majority of people from Azerbaijan are Muslim, Nagorno-Karabakh’s 140,000 inhabitants are Armenian and ethnically Christian.

In the last two weeks, the fighting in the region has started up once again after Azerbaijani forces attempted to recapture territories occupied by Armenia. 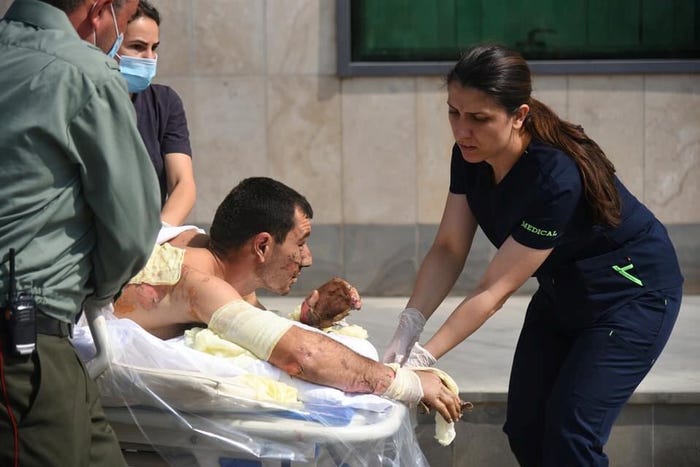 A photo released by the Armenian Foreign Ministry shows a man, said to be a civilian, from Nagorno-Karabakh receiving medical treatment on September 27, 2020. Reuters

Both sides have been accusing each other of expanding the hostilities beyond Nagorno-Karabakh and targeting civilians.

Heavy artillery, tanks, missiles, and drones were also involved for the first time in both Armenia and Azerbaijan. 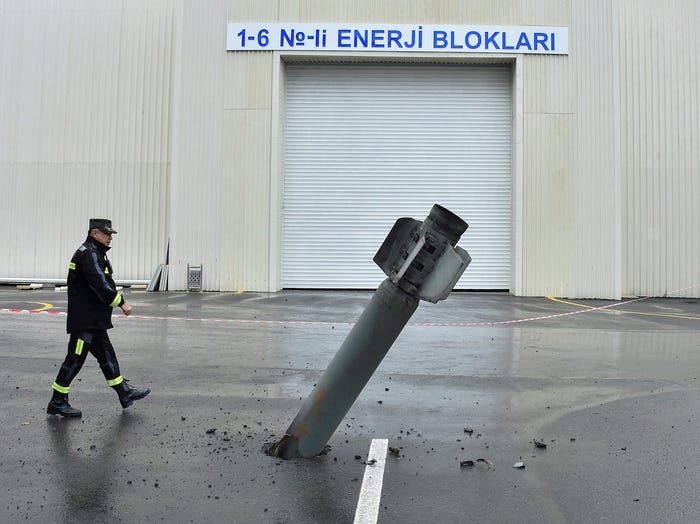 A sapper works next to an unexploded BM-30 Smerch rocket allegedly fired by Armenian forces near the Mingachevir Hydro Power Station in the town of Mingachevir, Azerbaijan, on October 5, 2020. REUTERS/Stringer

Both sides have been accused of also using cluster bombs, which have been banned under the convention on cluster munitions (CCM).

Cluster bombs are particularly dangerous because they can fail to explode on impact, meaning they can pose a threat to civilians long after conflicts have ended.

This was the first time since the 1990s that populated areas in Nagorno-Karabakh were hit by missile strikes. 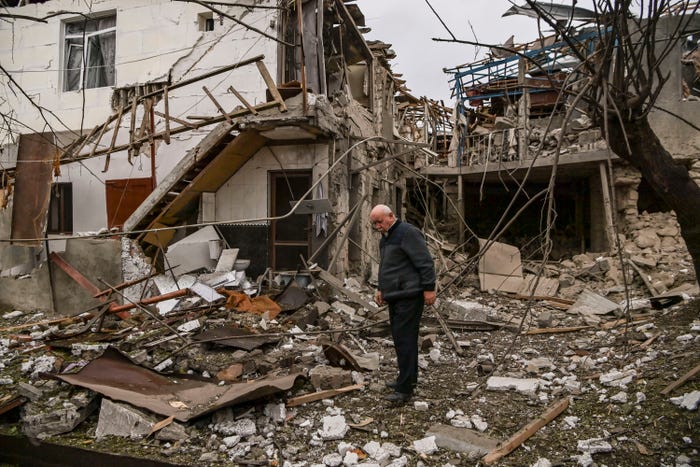 Man looks down at the rubble from his destroyed home in Stepanakert, Nagorno-Karabakh, on October 7, 2020. Getty

An official from Nagorno-Karabakh said earlier this week that the shelling has resulted in thousands of people being displaced from their homes.

"According to our preliminary estimates, some 50% of Karabakh’s population and 90% of women and children — or some 70,000-75,000 people — have been displaced," they said, according to the Guardian.

Both sides accused each other of deliberately attacking civilian buildings. 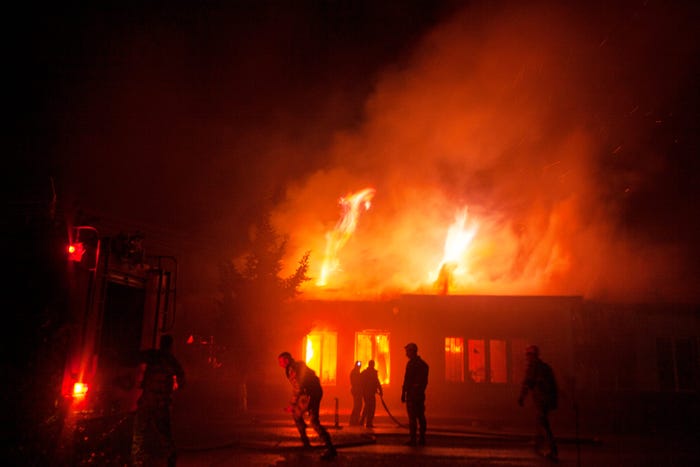 Firefighters work as a building in a residential area burns after night shelling on October 3, 2020. AP

Armenia accused Azerbaijan on Thursday of shelling a historic cathedral in Nagorno-Karabakh. 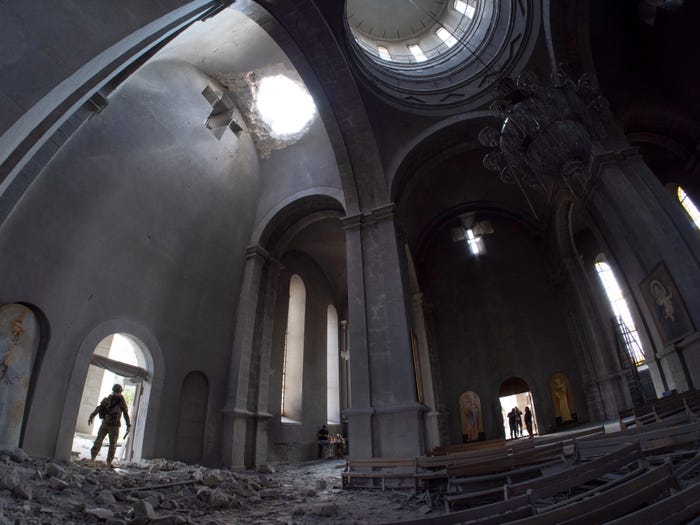 A hole made by a shell in the roof of the Holy Savior Cathedral during a military conflict, in Shushi, outside Stepanakert, Nagorno-Karabakh, Thursday, October 8, 2020. AP

Azerbaijan however has denied it shelled the cathedral.

"The information about the damage to the church in Shusha has nothing to do with the military actions of the Azerbaijani army," the defense ministry said in a statement, according to Al Jazeera.

"Unlike the armed forces of Armenia … the Azerbaijani army does not target historical, cultural, or especially religious buildings and monuments," they added.

A group of children was inside the cathedral at the time of the bombing, but they were not wounded, according to local media reports.

"There is no military, nothing strategic here, how can you target a church?" one resident said, according to the Guardian.

The city that was hit the worst was Nagorno-Karabakh’s capital Stepanakert, where most residents were left without electricity… 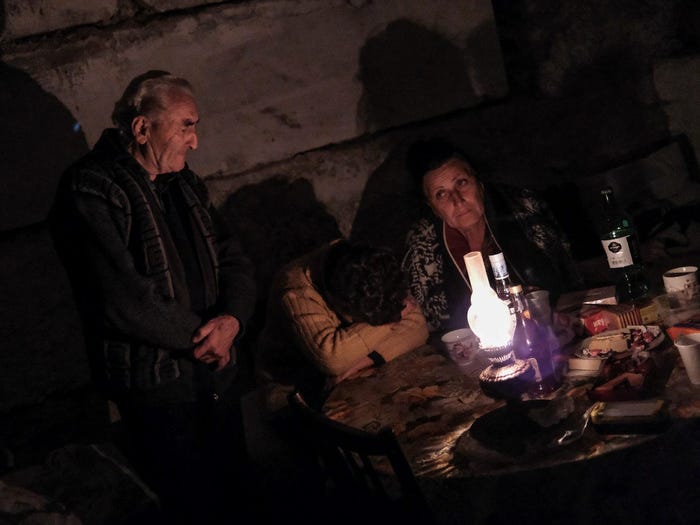 Civilians gather in the basement of a building used as a bomb shelter in Stepanakert, Nagorno-Karabakh, on October 5, 2020. Areg Balayan/ArmGov/PAN Photo/Handout via Reuters

…and others were forced to take shelter in basements and bunkers. 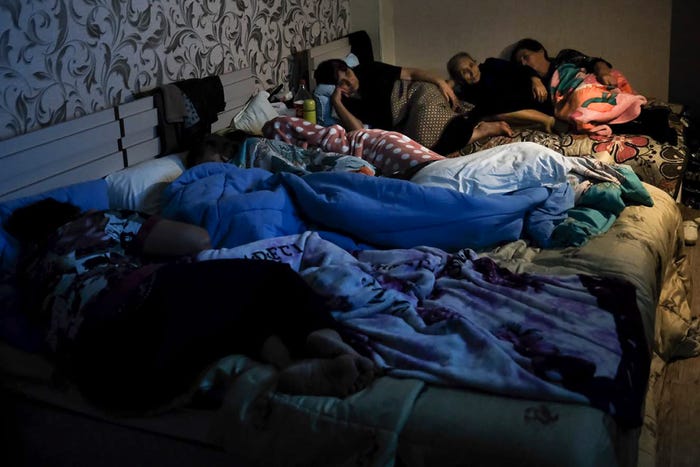 People watch the state TV while sleeping in a bomb shelter to protect themselves from shelling in Stepanakert, Nagorno-Karabakh, on September 28, 2020. AP

More than 300 people died in the conflict, although casualty claims have not been independently verified. 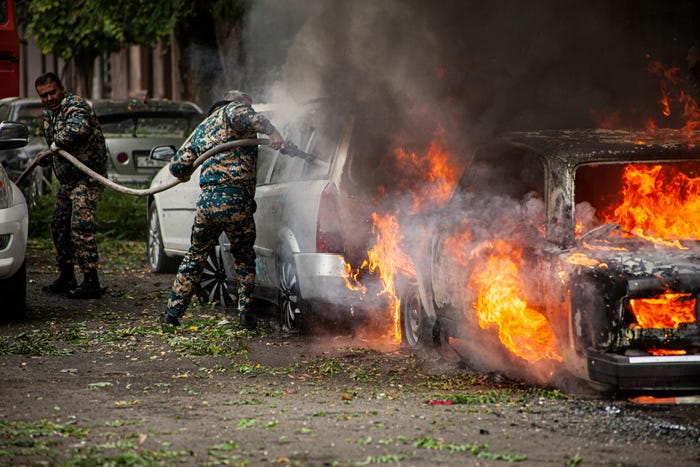 Firefighters put out a car that is on fire in Stepanakert, Nagorno Karabakh on October 4, 2020. AP

However, human rights organizations fear that the official death toll on both sides is actually much higher. 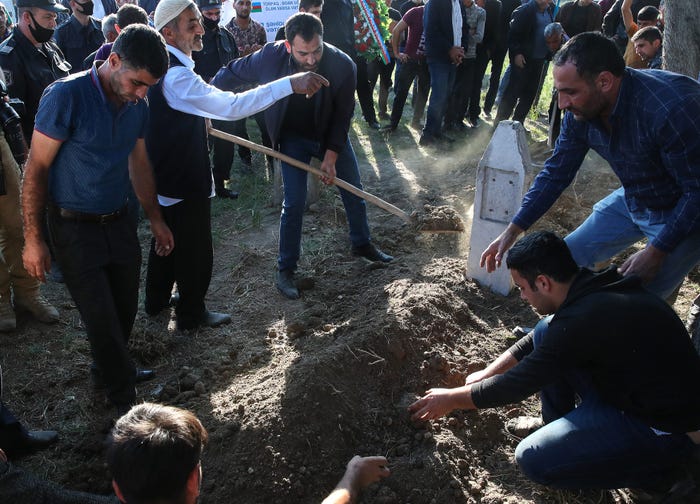 Local people take part in a funeral ceremony on October 8, 2020, for an Azerbaijani serviceman who died in action in one of the villages bordering on Nagorno-Karabakh Getty

After negotiations in Moscow, which were mediated by Russia’s foreign minister, both sides agreed to a ceasefire starting on Saturday, at 12 pm local time. 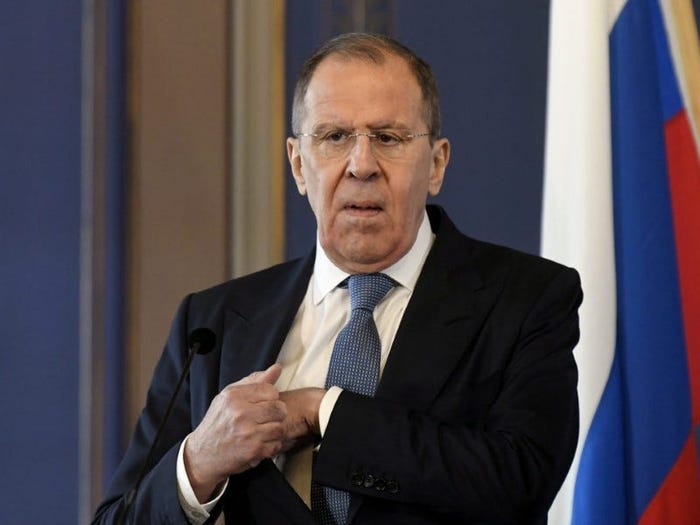 Russian Foreign Minister Sergey Lavrov attends a joint news conference with his Finnish counterpart Pekka Haavisto in the House of the Estates in Helsinki. Reuters

Both sides have been asked to exchange prisoners and bodies of those killed in the conflict.

"Azerbaijan and Armenia begin substantive negotiations with the purpose of achieving a peaceful settlement as soon as possible," Lavrov told reporters, according to the Guardian.

However, within minutes of the ceasefire taking effect, both sides have accused each other of breaking it, raising doubts about how serious the truce will turn out to be. 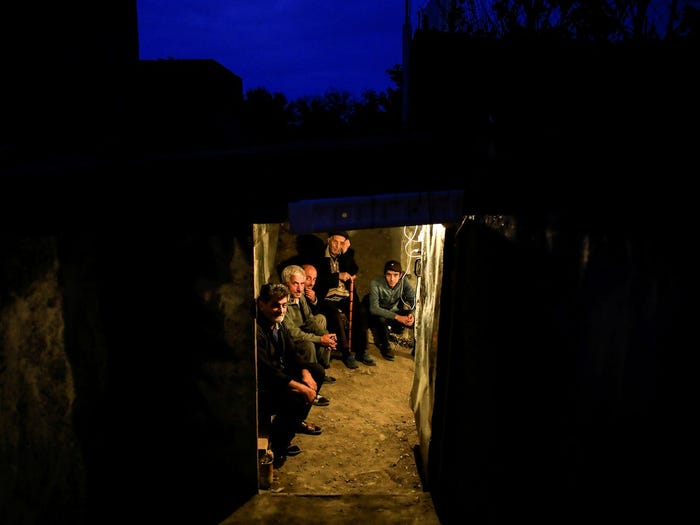 Local residents take shelter in a dugout in the city of Terter, Azerbaijan on October 6, 2020. REUTERS/Umit Bektas

Five minutes after the truce officially took hold, Armenia accused Azerbaijan of shelling one of its settlements, while Karabakh forces alleged that Azeri forces had launched a new offensive.

Fitness Calculators – Get yourself FIT!

Cartoon: Israel: Ever wonder why?

Facebook’s Billionaire Jewish scumbag loses $3.3 billion in one day because of Facebook Censorship!

My Concerns: Trump’s Court cases seem to be falling apart? – Chain of Command breaking down?

A Synagogue for the Richest Jews in Russia – My Comments

9 Months for a letter to get to me! – COVID & The Unbelievably useless South African Post Office

Election Fraud: The Dems and their ACLU Jewish communists’ skirt every known fact

GOOD NEWS: Is Sidney Powell getting a much bigger audience through Fox News appearances?

Putin: It is only nuclear weapons that can save Russia from the West – My Comments

Photo: TRUCKLOAD of election fraud? Whistleblower testimony part of claim disputing over a MILLION ballots across US

Reader suggestion: We should all be writing about Communist China like THIS…

Biden is coming to seize your GUNS! – Biden team has already reached out to ATF with an eye towards banning 80% receivers and pistol braces already owned by MILLIONS of law-abiding Americans

Is Amazon JEWISH? Is Bezos Jewish? Jeff Bezos looks like another CIA Front by Mile Mathis – My Comments

Swamp Rat: A terrible candidate for US Presidency: The Case Against A President Joe Biden – My Comments