[Whatever white Americans do, NEVER GIVE UP YOUR WEAPONS! In the end, its the ONLY THING that MATTERS. You can get EVERYTHING back with YOUR WEAPONS at any time in the future. I'm glad they are being sued for the slightest move on the 2nd Amendment. I hope they win. Jan]

Firearm ownership may be guaranteed under our Constitution by the Second Amendment. But it’s secondary at best to the New Jersey officials who’ve closed down gun stores during our Wuhan flu panic, calling them non-essential. Now two Garden State officials — who some would say are non-essential themselves — are being sued for trampling constitutional rights.

“The case was filed by the Second Amendment Foundation and the New Jersey Second Amendment Society on behalf of Robert Kashinsky and Legend Firearms, a gun shop in the state,” reports WND.com. “Defendants are Gov. Philip D. Murphy and State Police Supt. Patrick J. Callahan.”

“‘Gov. Murphy cannot simply suspend the Second Amendment, and neither can Supt. Callahan,’ said SAF founder Alan M. Gottlieb,” WND continues. “Yet, under this emergency order, that’s exactly what they’re doing. The Constitution, and federal law, don’t allow that. New Jersey may have been the first state to ratify the Bill of Rights, but they’re the last state to recognize it.”

The case developed when Kashinsky sought to purchase a firearm for personal protection during the current crisis.

However, Murphy issued Executive Order 107 on March 21 that ordered all non-essential retail businesses closed to the public. The order does not include licensed firearms dealers on its list of “essential” businesses that may continue operating during the crisis.

That means the Second Amendment was violated, the case explains.

“In order for New Jersey residents to purchase firearms,” explained Gottlieb, “they must go through a licensed firearms retailer and pass a background check. However, Murphy’s order was subsequently followed by a notice posted on the state police website that the agency is no longer conducting background checks.”

The plaintiffs also explained that while they don’t seek to minimize the Wuhan flu’s seriousness and understand that lifestyle changes are currently necessary, there are constitutional limits to the actions government may take.

For example, could a state suspend the right to free speech if it somehow considered doing so beneficial in combating the virus?

Of course, firearms aren’t technically a “survival need” like water, food, and shelter — but they can be necessary for survival. In fact, when seeing all the liberals hoarding food, one should wonder: If they really think things could get that bad, do they have guns and ammo? For a mountain of food won’t help in a social breakdown situation if bad actors can take it, and maybe your life, from you.

(And what’s with the toilet paper hoarding? So when the apocalypse comes, you can drop dead with a clean backside?)

But New Jersey, where only the mobsters are supposed to have guns, isn’t alone. While demand for firearms and ammo has recently skyrocketed as common people exercise common sense, left-wing governments are again demonstrating how uncommon the quality is. As American Thinker reports:

In mid-March, Mayor Deborah Frank Feinen, of Champaign Illinois, signed an executive order declaring a state of emergency, despite the absence of any coronavirus cases in Champaign. With the order is in place, Feinen has arrogated to herself the ability to ban gun sales.

In Philadelphia, the police department stopped issuing concealed carry permits, while simultaneously announcing that they would be “delaying arrests for … narcotics offenses, thefts, burglary, and prostitution.” However, the police will “continue to arrest people carrying a firearm without a permit.” [So when three unaccountable muggers with knives rob you, you’ll be unable to defend yourself.]

In the San Francisco Bay Area, a region notoriously hostile to the Second Amendment, a gun store located in Alameda County (home to the City of Berkeley) tried to keep its two locations open despite the local and state-wide shut-down orders .

WOW! California shuts gun stores as ‘non essential’ due to #coronavirus while letting criminals out AND reducing law enforcement?

101 people are talking about this

The sheriff’s department responded to the gun dealer, as the tweet below relates.

@Solartactical you are not an essential business in Castro Valley. Please move to minimum basic operations per the Alameda County Health Order. 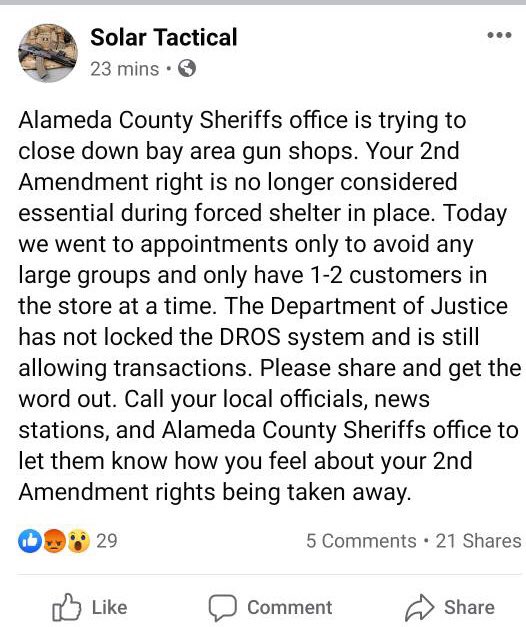 38 people are talking about this

Not surprisingly, though, Solar Tactical ultimately yielded to government pressure.

Regardless of the New Jersey case’s merit and resolution, what the above reflects is that there really are “two Americas” (at least), having two radically different worldviews. People applying common sense understand that when seconds count, the police are minutes away (it has become a cliché, I know). Realize also that the Supreme Court ruled in 2005 that law enforcement has no duty to protect you.

So you’re left to protect yourself. Yet the leftists would prevent that, instituting irrational policies that could only be driven by ill intent and/or stupidity born of intellect-clouding emotion. Miscreants bent on evil, who’ll take advantage of social breakdown and commit robbery, murder, or rape, don’t care about anti-firearms prohibitions. Such laws only affect the good people.

The leftist mentality, in its least-malevolent form and often exhibited by useful idiots ignorant of the aforementioned 2005 ruling, says “It’s the government’s job to defend us.” (Heck, Bernie Sanders inveighs even against charity, claiming that it’s the government’s job, too.) History tells a different tale.

During the Los Angeles riots in 1992, a politically correct government’s sins of omission allowed for a period of mayhem, and good citizens were harmed. Innocent truck driver Reginald Denny was beaten almost to death. And the only people able to defend themselves were the armed. Just consider ex-merchant David Joo, who described in the video below what transpired outside his store in ’92 after the police fled the scene.

On a lighter note, there may be a way for gun dealers to get around future non-essential-business-closure orders. Get your establishment classified as a grocery, and sell guns “on the side” (wink, nod). Just carry a few non-perishable food items and offer them gratis with a gun purchase. You could call your store, oh, I don’t know, Guns & Butter.

As for those who know butter, and better, they understand that government is there to protect you — until it’s not.

23rd September 2019 jlamprecht Comments Off on Filthy Stinking Jews at work in UK: Parents shocked as UK schools teach 6-10yo kids to touch their ‘private pa rts’ in beds & showers

The Union is Dissolved: Is America heading for a break up? – My Comments

11th December 2020 jlamprecht Comments Off on The Union is Dissolved: Is America heading for a break up? – My Comments

How to respond to Gun Control arguments…

COVID Vaccine: Will the CLOT SHOTS cause widespread mental retardation and infertility? – My Comments

WARNING: COVID: The Vaccine makes you dependent – You won’t be immune ever again! – government stats unveil the horrifying truth

Video: FANTASTIC:Cancel culture backfires as thousands of students sign up for professor’s lecture – My Commen ts

The Jew Sabrosky on why the 911 Movement Failed – My Comments

JEWS STAGED MANAGED THE FAILURE OF THE 9/11 Truth Movement

Video of the Christmas I got rid of my Jewish friends – also: The Great Jewish Mask – Jewish Scams

EXCELLENT NEWS: Trust in US media drops near record low with only 36% of Americans expressing confidence in reporting – My Comments

Photo: Earth has had TWO Moons for the last 3 years…

JEWS AT WORK: Why is White Fertility so low … why can’t Whites have CHILDREN? –

IMPORTANT: Race is real: Story of White American male who had a Black girlfriend and was pro-Black

USA: Very disgusting: Staff at US newspaper told to find a new job if they can’t support Israel

Napoleon: There is no shortage of talented (European) people

Black Muslims in Africa: War in Mozambique: Will the Islamic State declare war on South Africa?

ONLY IN SOUTH AFRICA: Zuma is too sick to be in jail, not not too sick to visit casinos and other public places while under parole!