[The caltrop is a tool some special forces, etc have used. I was amazed to discover that the Roman and other Western armies used them against cavalry!!!! Amazing! I thought it only had use for vehicles!!! Jan] 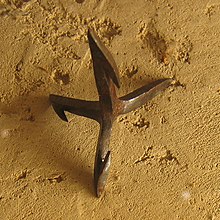 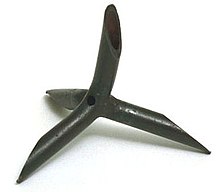 Caltrop used by the US Office of Strategic Services. The hollow spikes puncture self-sealing rubber tires. The hole in the center allows air to escape even if the other end of the tube is sealed by soft ground.

Caltrops are spiked weapons used against men and horses since at least as early as Roman times.[1] Later versions were designed to deflate automobile tires. They are a type of anti-personnel weapon, and anti-vehicular weapon. Japanese samurai used a similar weapon, the makibishi.

Iron caltrops were used as early as 331 BC at Gaugamela. They were known to the Romans as tribulus, meaning ‘jagged iron’.[2] They were used in the Battle of Carrhae in 51 BC.[3]

The Roman writer Vegetius, discussed scythed chariots in his De Re Militari:

The armed chariots used in war by Antiochus and Mithridates at first terrified the Romans, but they afterwards made a jest of them. As a chariot of this sort does not always meet with plain and level ground, the least obstruction stops it. And if one of the horses be either killed or wounded, it falls into the enemy’s hands. The Roman soldiers rendered them useless… they strewed the field of battle with caltrops, and the horses that drew the chariots, running full speed on them, were infallibly destroyed. A caltrop is a device composed of four spikes or points arranged so that in whatever manner it is thrown on the ground, it rests on three and presents the fourth upright.[4]

In more modern times, they were used by both the Allies and Axis during World War II to puncture the tires of wheeled vehicles. Improvised caltrops, usually made of welded nails, have also been used occasionally by labor activists in the United States during strikes to destroy the tires of vehicles belonging to management and replacement workers. In the labor context, these devices are more often called jack rocks. A recent example of the use of jack rocks in labor disputes was in 2012, allegedly by two men on a picket line at an aluminum products plant in West Virginia.[5]

EXCELLENT: NAZI UFOs in Germany are scaring the Jews! – The Real Reason the Jews are SCARED!

Cartoon: When the Jews flee from Europe, its because…

Coming soon … my new little shop, linked to this website…

Photos: The Jewish Roots of ANTIFA – Used to fight against Hitler!

10 Photos: If God really exists, would he have chosen the Jews as his “Chosen People?”

3 Photos: Another Jewish Ritual that should be BANNED: Kapparot: Why Thousands of Chickens Will Die Today in Controversial Ancient Ritual

How Jews are killing the White Race: White men are becoming ever more UNATTRACTIVE to White women…

America (& the entire Western World): Where are the men? – My Comments

Jewish & BLM INSANITY: Since May 2020: 183 monuments, memorials, statues, and major historical markers defaced or pulled down – My Comments

Photo: Was this a JEW who DEFRAUDED JEWS? – Convicted fraudster Freddy David may lose home

FINALLY, A LETTER FROM MATT TODAY!!

Photo: Jews crawling everywhere: Manager of The Beatles Pop group was a JEW… – My Comments

Should I leave South Africa: Jewish TERRORISM against MY FREE SPEECH

The British Empire: Rhodesia, the BEST of the British: Africa, Recolonisation – The Jewish Poisonous Mushroom

WW2: Real History, Not lying Jewish History: 66 Questions and Answers on the Holocaust – My Comments on the greatest Jewish lies

REAL HISTORY, NOT JEWISH HISTORY: Can you pass: THE HITLER TEST by Diane King