[Everything the Germans said back then is still true … truer than ever. Hitler told the truth, Goebbels told the truth, and Julius Streicher, the man behind this book and much more, was hanged by the Jews on Purim in revenge. What a fine white man. That he and the others had to die for such a race of pure filth. The garbage win and the whites lose … the BEST WHITES LOSE! Sickening.

The Poison Mushroom … what a beautiful title. The Jews are poisoned mushrooms in our societies. If you get them in … you will die. Jan]

Farming woman, have I got something special for you
today. Look at this material! You can make a dress
from it that will make you look like a baroness, like a
countess, like a queen. 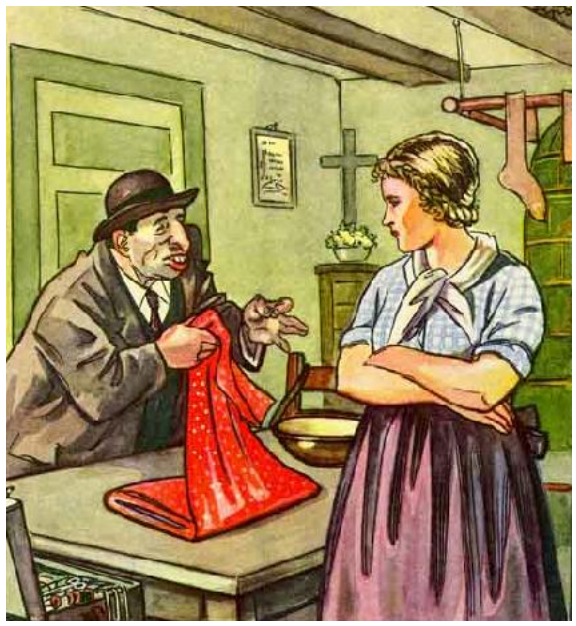 It is a festival evening in the village when the Jew turns up with his wares. The Jew flatters the peasant woman
and spreads out his wares.

Everything the heart desires, Levy has for sale.

But the German peasant girl turns down his offers.

The Jew persists, and shows her some stuff of ….. purest wool. That will make a dress for you, woman, so that
you will look like a Baroness or a Princess, like a Queen. And cheap, too, that I can tell you!
But the peasant woman knows the Jew too well.

I am buying nothing from you, she says, and goes away.

The Jew packs up and goes away cursing. He consoles himself with the knowledge that there are lots of other
peasants who can be more easily duped than this one.

Woe to the woman, however, who lets herself be taken in by his chatter. It will happen to her. As has happened
to so many other peasant women once they have let the Jew in. There is no escape. There is an old saying: 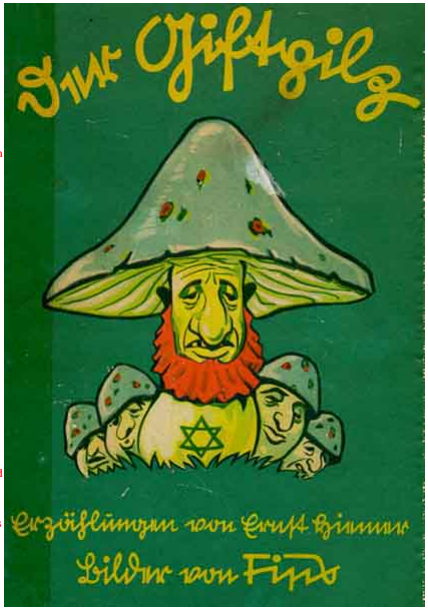 The book for German children, published by Julius Streicher called the Giftpilz (The Poison Mushroom) sought to educate children in the ways of the jüdischen Parasiten. It is still true today and there are lessons to be learned from it, not just for children either!

Video: Only the Colour of your skin and other Anti-White Lies!

SHOCKER: How Italy got heavily infected with the Corona Virus … the real story… My comments

SA: VBS: Top Blacks stealing from Blacks: Ramaphosa lied about the R500,000 to his son – He got the money!

Photos: Prepping: SHTF: 10 Good Spots To Hide Your Food In A Crisis

IMPORTANT: Malware Traffsend Warnings… WHAT TO DO & also Please notify me

BIDINFLATION: Prices of goods and services skyrocket yet again

From Germany: Article in the BILD newspaper

Photo: The Greatest Olympics of all time: Berlin Olympics 1936

What do German veterans of the Second World War still alive today think of Hitler now?