[Robert Mugabe resigned a few hours ago. BUT, remember these points:-
o Now that he’s resigned, it makes the coup LEGAL – so this lets President Zuma and the African Union off the hook
o Mugabe is a BILLIONAIRE in US Dollar terms. He owns a hotel in the UK, and has many assets elsewhere including Asia.
o Mugabe is NOT going to be prosecuted for anything – which means he gets away with ALL his crimes and mass murder.
o I hope he does not settle in South Africa – that would be bad.
o The good side is that it surely scares Zuma of South Africa – so Globalist Elite will like it and might even have helped support it.
o It is good that it will scare other black leaders and perhaps even Malema a bit – because it will show them that they’re not untouchable.
o He’s filthy rich and he and his family will be living fine whereever they go – which is sad.
o His one son this week showed a pic of his latest watch which he boasted is worth $60,000! – That’s the lifestyle these black scum communists are used to.

I suspect he resigned rather than took the impeachment. So the bummer is he gets away with everything and walks into the sunset.

On the plus side, I saw a news article which showed that the enmity between ZANU PF and the opposition MDC which was created by whites+blacks is as strong as ever. Blacks told me that ZANU PF will probably cheat at next year’s national elections. ZANU PF is somewhat amenable to white farmers coming back BUT ONLY ON THEIR TERMS (which I wish whites would REJECT). There might be slight improvements in Zimbabwe but I doubt things will change – nor do I care.

Even Mugabe realised and knew that his comrades in ZANU are themselves untrustworthy, so I suspect new problems will arise.

o Mnangagwa is a bad boy with spying CIO links. Chances are he’ll be ruthless too.

For us Rhodesians it is good to see Mugabe going down. He’s been in our faces for 37 years. So its a small victory and that’s good. But its not a real victory in a sense that means anything to whites.

The key thing the blacks want is for the economy to improve because its STILL IMPLODING EVEN NOW. But I really am AGAINST whites going there to build up a black state while having no power. We whites MUST STRIVE FOR OUR OWN POLITICAL AND MILITARY POWER.

Mugabe was a BAD INFLUENCE across Africa being extremely communist and very anti-white. He was seen as invincible. So I think the main impact will be on Zuma and on Malema.

Otherwise, as Dr Peter Hammond said, nothing will change. I believe we whites MUST NOT CO-OPERATE with blacks in their politics at all, anywhere.

But it does close a bit of a chapter for Rhodesians. At least we got to see this communist fuck standing down. BUT he did NOT get the treatment he deserved which was to be stripped of everything he had and to be hanged or shot.

We whites must now focus on ourselves.

Here is a news story about his resignation. Jan]

Thunderous celebrations have erupted in the streets of Harare as people sing and chants following the news of Robert Mugabe’s exit.

Zimbabwe’s Members of Parliament celebrate after Robert Mugabe’s resignation on 21 November 2017 in Harare. Picture: AFP.
Hitekani Magwedze & Pelane Phakgadi | about an hour ago

HARARE/JOHANNESBURG – Extraordinary scenes are playing out on the streets of Harare on Tuesday evening, where thousands of citizens are celebrating the news that President Robert Mugabe has resigned.

Parliament’s speaker Jacob Mudenda made the announcement just before 6pm.

It was met with loud cheers in Parliament.

Outside on the streets, Zimbabweans holding up flags hugged each other while crying and singing.

This man says Mugabe’s time was up.

Citizens have even called on their countrymen to come home, saying it’s safe now.

“We hope everything will work out for us because our prayers have been answered.”

Thunderous celebrations have erupted in the streets of Zimbabwe’s capital Harare as people sing and chants following the news of Mugabe’s exits.

Zimbabweans have taken to the streets again, in just three days, this time to celebrate.

Residents say they’re happy now they have a prospect of a better future.

Cars are hooting, the Zimbabwean flag is flying high and there’s hardly a person standing still. 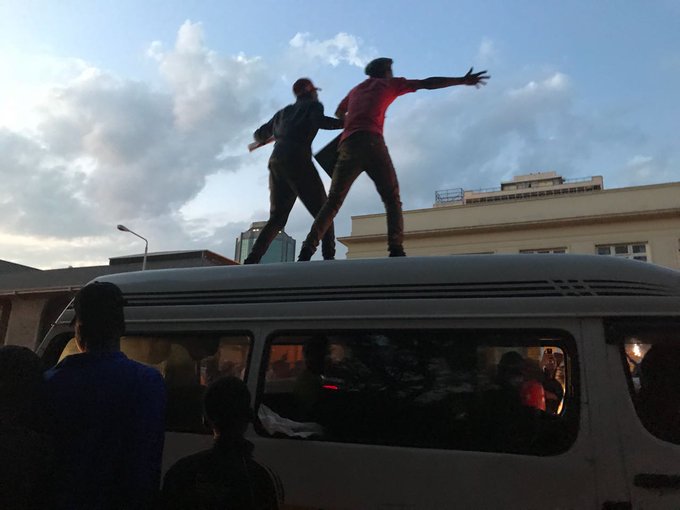 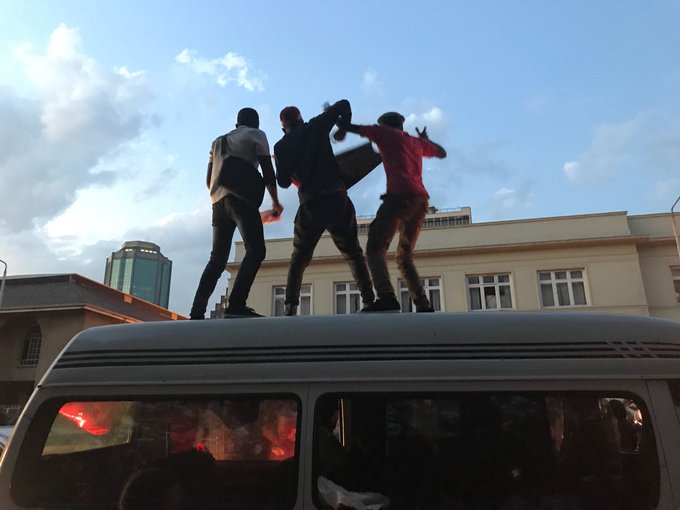 #Zimbabwe A few men dance on top of taxi’s as they celebrate Mugabe’s resignation.

Zimbabweans living in South Africa have taken to the streets in parts of central Johannesburg in celebration.

Hundreds of Zimbabweans are seen singing in celebration.

They say they do not care who becomes the next president but are glad that the man who ruled the country for almost four decades has stepped down.

“I hope the next president will see Mugabe’s errors.”

Streets in the Hillbrow area are full of Zimbabwean nationals seemingly spreading the news to others.

At the same time, the Department of International Relations says President Jacob Zuma’s planned visit to Zimbabwe on Wednesday will go ahead as planned.

Spokesperson Clayson Monyela said: “We’ve noted the announcement that’s been made this afternoon by the Speaker of Parliament. South Africa will be issuing a comprehensive statement related to the latest development. In addition, our understanding is that the president will still travel to Zimbabwe.” 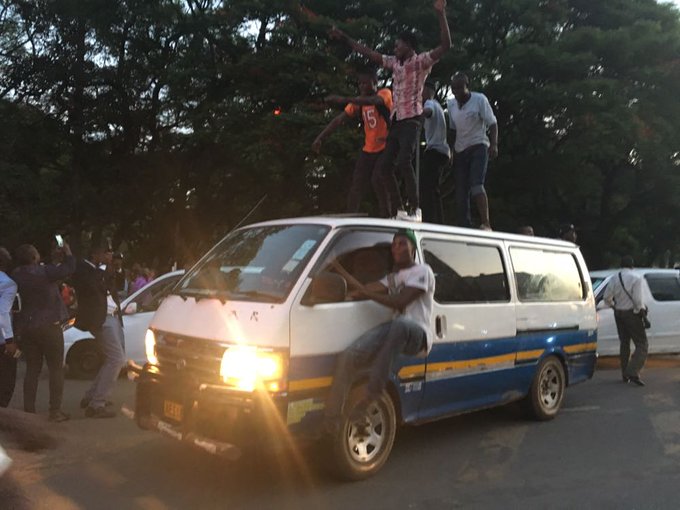 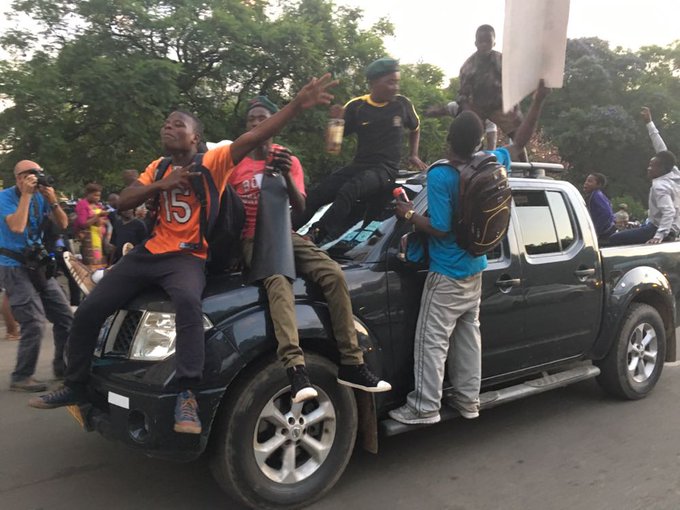 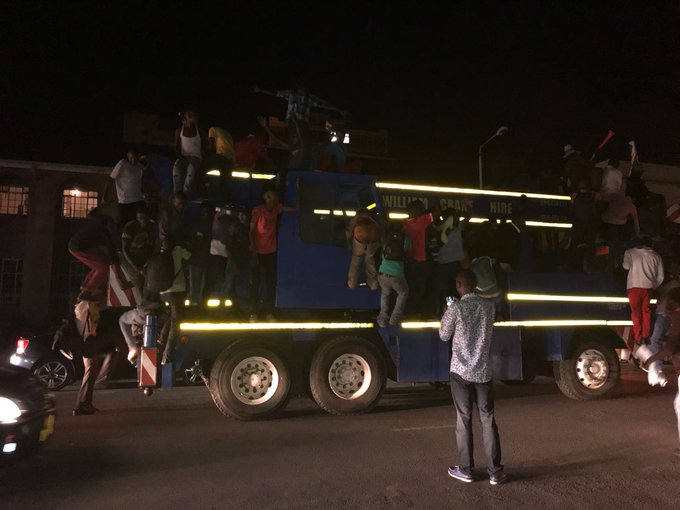 #Zimbabwe#MugabeResigns Scenes from the streets of Harare.

Details of Mugabe’s resignation letter are beginning to emerge.

The 93-year-old said he is voluntarily stepping down to allow a smooth transition of power.

The letter makes no mention of who is left in charge of the country.

The speaker says he is working on legal issues to ensure a new leader is in place by the end of Wednesday. 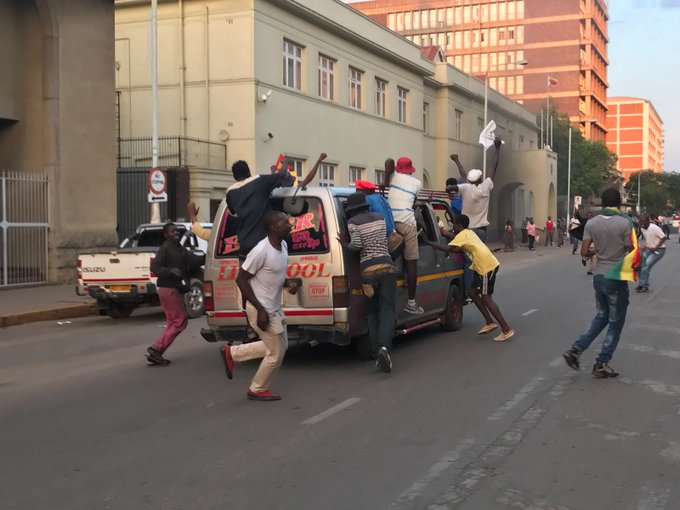 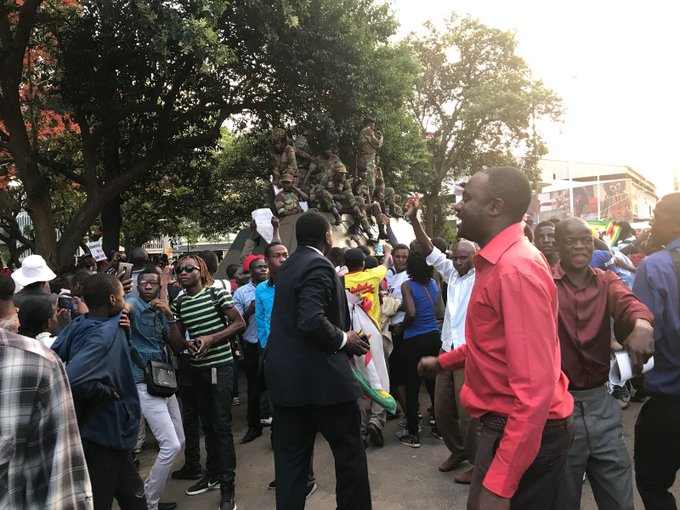 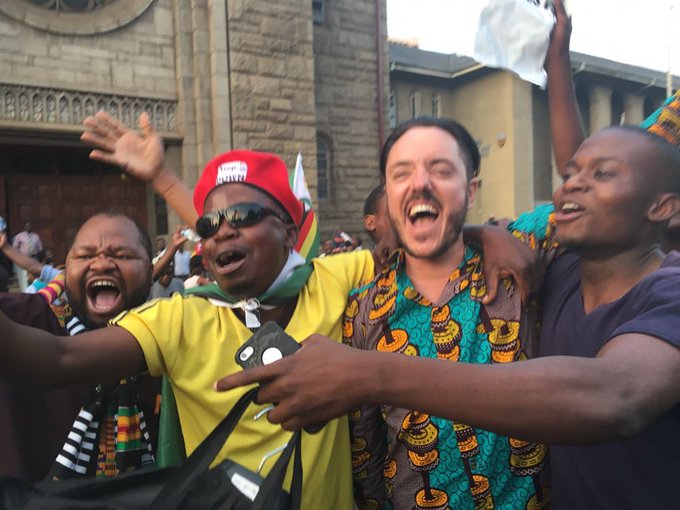 #Zimbabwe Zimbabwe President Robert Mugabe has resigned – a huge celebration out on the streets of Harare CBD.

5 thoughts on “Zimbabwe: Robert Mugabe resigned – BUT he’s a billionaire & remember these points…”

US Navy: Chinese warship fired laser at US aircraft – My Comments

Video & Audio: BANNED: How Jews trick and cheat the RICH!

Excellent Meme: The Difference between a White (Aryan) Soldier and a Jewish soldier

ARGENTINA overrun by Jews: Jews out to SMASH Professor: Argentinian university professor offers bonus to whoever finds a poor Jew – My Comments

U.S. Police Routinely Travel to Israel to Learn Methods of Brutality and Repression

Long Term Effects of Lock-down: Why Us?: A Year After Being Laid Off, Millions Are Still Unemployed

Book Review: The Myth of the German villainy – Translated into French – My Comments

Chart: The climate models have been uncannily accurate – My Comments and Questions

The Jewish bag of shit: Pompeo might run for President

Canada: Where lies Liberal loyalty: Canada or China? – My Comments

Photo: Thank you from a Rhodesian to the French: FRANCE helped Rhodesia & Apartheid South Africa the MOST!

Are Jews dividing Poland & Germany against each other? – Poles Outraged: Germany Paid Them Only $2.41 Billion in WW2 Reparations

IDIOTIC MADNESS: INSANE Liberal wishful thinking: It could take at least 10 years for SA to get back to inv estment grade – chief economist – My Comments