[At least there are sane Japanese out there. They’re more sane than us whites. But as you can see, the Jewish rot exists inside Japan too. Its disgusting. The Japanese are also slowly dying, like the whites. I regard the Japanese as our racial allies.

WW2 was the defeat of civilisation and progress. That is why the entire Western world is going downhill. Jan]

AS JAPAN predicts a rise in the number of immigrants and foreign tourists in the coming years, a new television show has turned migrant deportations into entertainment.

The program provoked some outraged viewer reactions and insights about the plight faced by visa overstayers and undocumented migrants in Japan.

Taikyo no Shunkan (???????), which translates to “At the very moment they were deported” in English, premiered on Fuji Television in a Saturday evening prime time slot on Oct 6, 2018.

Using a typical reality show format, the two-hour program follows a group of so-called “G-Men”, or immigration officers, employed by the Tokyo regional office of the National Immigration Bureau as they hunt down visa overstayers and so-called “illegal aliens” (fuhotaizaisha, ?????) and squatters (fuhosenshu, ????) on camera.

In one segment, the immigration officers stake out the apartment of a Vietnamese man suspected of violating the conditions of his trainee visa. He and two others are arrested and interrogated on camera before being deported 24 hours later.

In another segment, the immigration officers storm a factory and detain a group of Indians suspected of being undocumented workers — the owners of the factory never appear on camera.

A final segment investigates the problem of Chinese “squatters” who have set up a vegetable patch on public land on an isolated stretch of riverbank in Kyoto.

For now, a fan upload of the video of the entire program can be viewed on DailyMotion.

The content and tone of Taikyo no Shunkan was widely criticised, with Japanese anti-racism group Counter-Racist Action Collective (C.R.A.C.) noting that Japan’s  Immigration Bureau, which employs the featured “G-Men”, actively promoted the program:

Tonight Japan’s Fuji TV is going to air a truely xenophobic variety prog titled “You Must Go Away!’, which features unauthorized foreign workers and refugees, of course mostly asians, being forcibly banned from Japan by immigration officers.

This program is officially backed up by Tokyo Immigration Bureau, which makes the least refugee approvals in the world and daily abuses immigrants and refugee applicants, sometimes to death. https://twitter.com/IMMI_TOKYO/status/1048065916607422464 …

[Translation: An announcement from the Tokyo Regional Immigration Bureau:

Tokyo Keizai Shimbun has published an overview of the Taikyo no Shunkanprogram on Saturday night (that features the immigration bureau). Please be sure to read this before you watch the program!!! Read the Tokyo Keizai story here: https://t.co/3fDFDaQKhV]

The television program appears as Japan plans to beef up its immigration services — the government seeks to recruit at least 500,000 foreign workers to help deal with a perceived labour shortage (Japanese women still participate less in the labour market, leading to worker shortages).

Many of the potential 500,000 foreign workers are expected to work as temporary labour with low wages and precarious employment, providing plenty of incentives for workers to seek better-paying but undocumented work once they arrive.

A Buzzfeed Japan article by Kota Hatachi about Taikyo No Shunkan collected online comments about the program and insights about the life of foreign workers in Japan.

One noted that while the undocumented workers were presented as a threat to Japan, in reality, it’s the workers themselves who are stalked, interrogated and subsequently deported, clearly facing the most risk.

Hatachi points out that at least 13 people have died in immigration detention in Japan since 2009, a statistic that was never acknowledged by the Taikyo No Shunkan program.

Mogi Kenichiro, a media personality and neuroscientist, also criticised the vapidity of a television program that treated immigration raids as entertainment:

[Translation: With no deep insights, without even a shred of critical analysis and the stupidity of superficial entertainment, Fuji TV’s Taikyo no Shunkan is the worst television program on Japanese television today. It’s an international embarrassment.]

Following the program’s broadcast, Japanese activists mobilised to let apprehended undocumented workers incarcerated in a regional detention center and others know that they are not alone 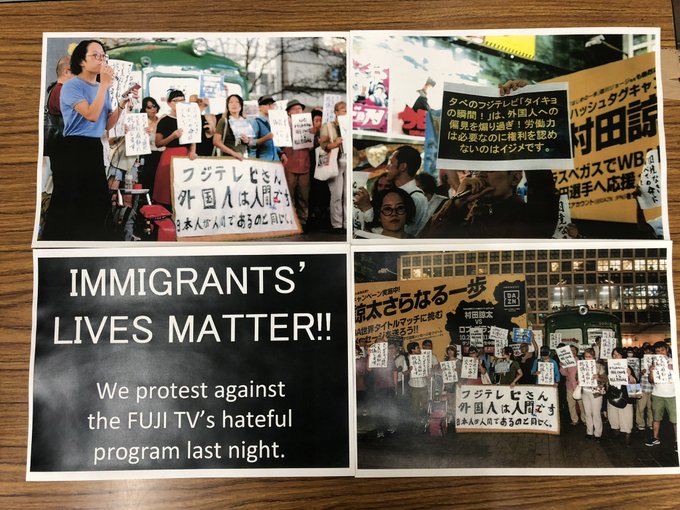 [Translation: We have mailed these photographs of people protesting Fuji Television’s Taikyo no Shukan in Shibuya (in Tokyo) to deportees at Ushiku (Higashi Nihon Immigration Center). We’ll go and visit them this week. #FreeUshiku #TelevisedHouseHoldSearches]

Television programs that exploit immigration enforcement as entertainment with the support and help of government border security agencies are not limited to Japan.

Media in the United Kingdom and Australia have long broadcast programs in which travellers and undocumented migrants are ambushed, interrogated, detained and sometimes deported on camera.

A similar Canadian program, produced with the direct cooperation of the Canada Border Services Agency (CBSA), was cancelled in 2016 due to personal privacy violations. The program is still broadcast in reruns.

SOUTH AFRICA: CAPE TOWN FARMER ARRESTED FOR COLLECTING RAINWATER ON HIS OWN PROPERTY

Military Coup under way in Zimbabwe

Reader Question: Have I read the South African, Dan Roodt on American Renaissance? – He is so negative & pro-Jew

Pic: Something all whites, especially men, must remember!

The Damage Stalin did to Russia in seizing farms – 2018: Crazy Ramaphosa wants to do the same in S.Africa!

1st May 2020 jlamprecht No Comments

INSANITY: Why Trump could face criminal charges for inciting violence and insurrection

SHOCKER: Half of SAfrica’s oil refining capacity offline until 2022 – My Comments

South Africa: MADNESS: Govt arrested 342,000 people in less than a year over COVID…

VERY IMPORTANT: The Jewish Role in Promoting Cannabis—And Why It’s Bad for You – Dagga – My Comments

Video: First Real Images Of Venus – What Have We Discovered?

From Monika Schaefer: In a German Prison: Alfred Schaefer in the Mask War – Write to Alfred in Jail

WARNING: Whites: Save your blogs & websites & save other important Websites

VERY IMPORTANT: Trump’s enemies: A Third Party is about to be born… will the GOP be smashed?

From Alex Linder: Jews want to prohibit us from being who we are in every way possible

S.Africa: COVID nonsense: Mr President, your Covid strategy is not working – My Comments

Video & Audio: Revenge of the Elite & the Jews: Why Donald Trump MUST BE DESTROYED

USA Democrats: Liberalism Will Be Unleashed — and Will Fail Again – Computer Data Experts can prove election was stolen – My Comments

Liberal filth & hypocrisy: Pelosi attempted a military coup against Trump while falsely blaming him for leading an insurrection – My Comments

Video: Rules Former Presidents Have To Follow – It won’t be that easy to kill Trump…