[No surprises here. BLM is a Communist/Marxist/Jewish Bolshevik organisation. Jan]

Is anyone really surprised?

As I’ve been writing about, we are seeing a rise of Marxism & Communism in Canada.

Much of it is being done under various guises, as Communists generally hide their true agenda and operate under different names that are more innocuous to the public.

Yet, there are times when the agenda and the infiltration of Marxists into our society is brought right out in the open.

Many have pointed out how some of the top BLM leaders and founders are avowed Marxists.

“Black Lives Matter co-founder Patrisse Cullors said in a newly surfaced video from 2015 that she and her fellow organizers are “trained Marxists” – making clear their movement’s ideological foundation, according to a report.

Cullors, 36, was the protégé of Eric Mann, former agitator of the Weather Underground domestic terror organization, and spent years absorbing the Marxist-Leninist ideology that shaped her worldview, Breitbart News reported.

“The first thing, I think, is that we actually do have an ideological frame. Myself and Alicia in particular are trained organizers,” she said, referring to BLM co-founder Alicia Garza.

“We are trained Marxists. We are super-versed on, sort of, ideological theories. And I think that what we really tried to do is build a movement that could be utilized by many, many black folk,” Cullors added in the interview with Jared Ball of The Real News Network.”

Of course, much of the establishment media ignored this, and in fact downplayed it.

Mentioning BLM’s Marxist roots, just like mentioning the Marxist roots of Critical Race Theory, is often dismissed as a ‘conspiracy theory,’ despite being 100% correct.

And yet, with Cuba in turmoil as people protest against the ruthless Communist Dictatorship, the official BLM organization has straight up sided with the Communists:

Apparently Black Lives Matter unless it’s black lives in Cuba living under a communist dictatorship who want to be free.

Marxism is an egregious crime against humanity. Shame on BLM” 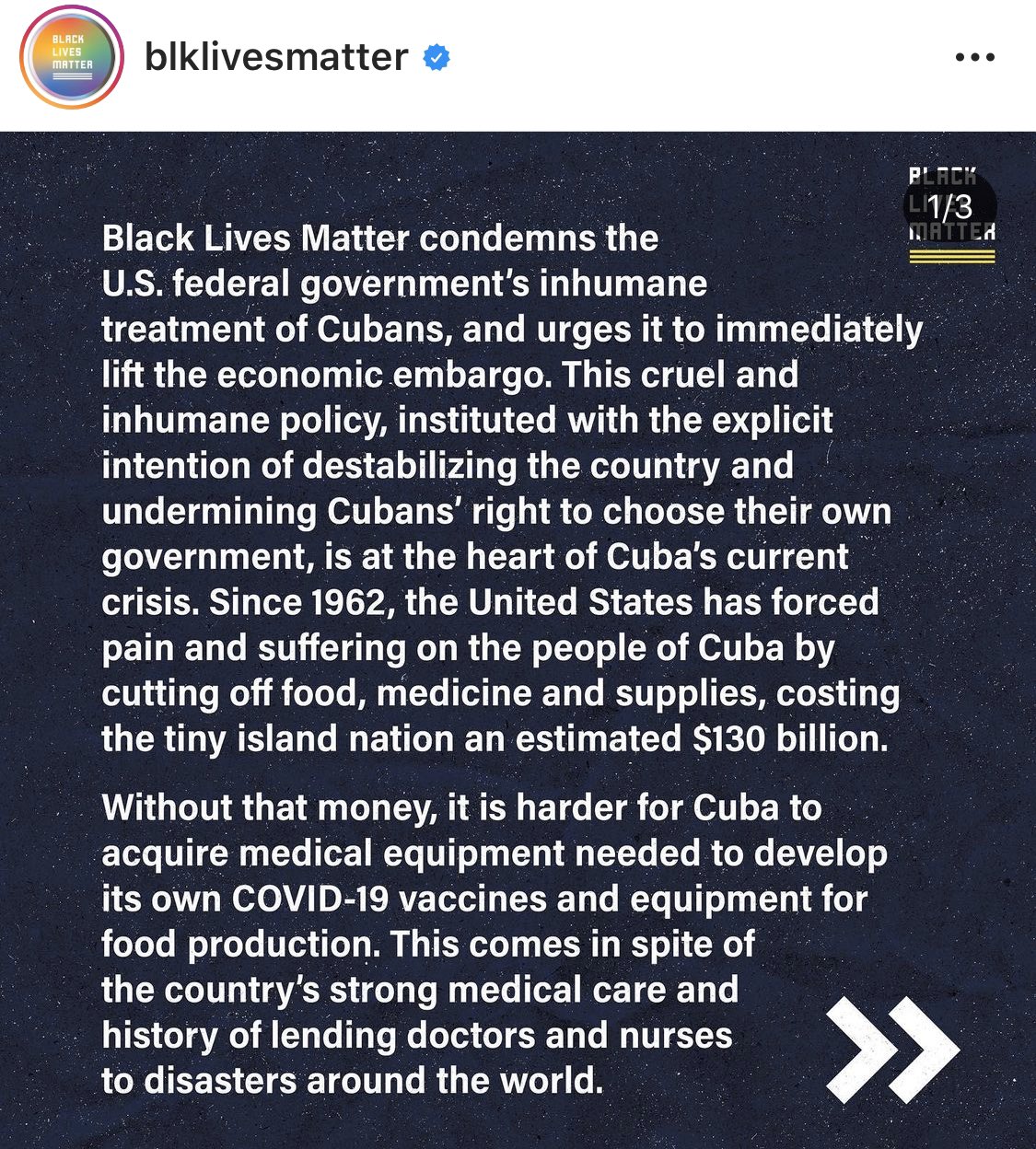 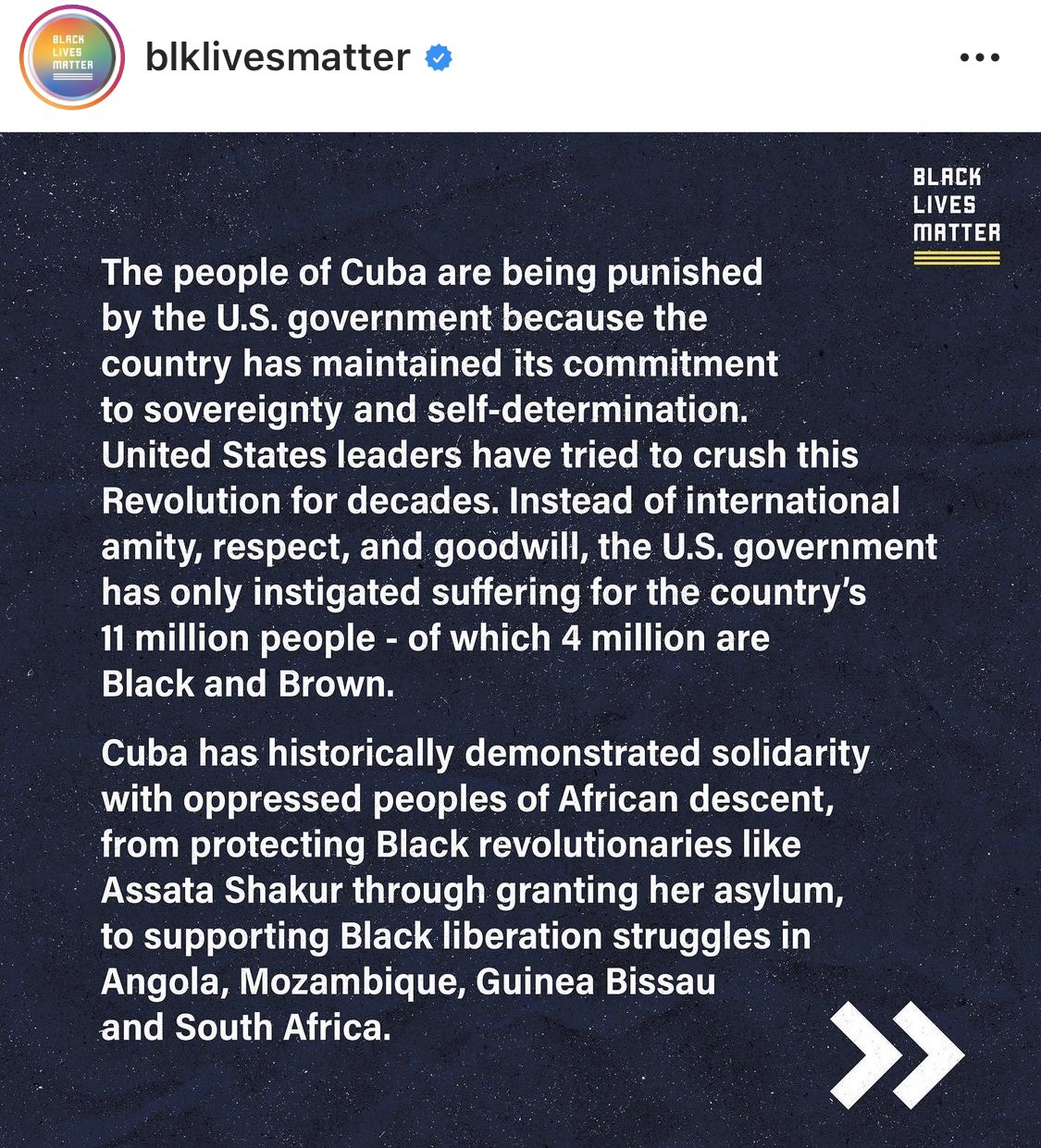 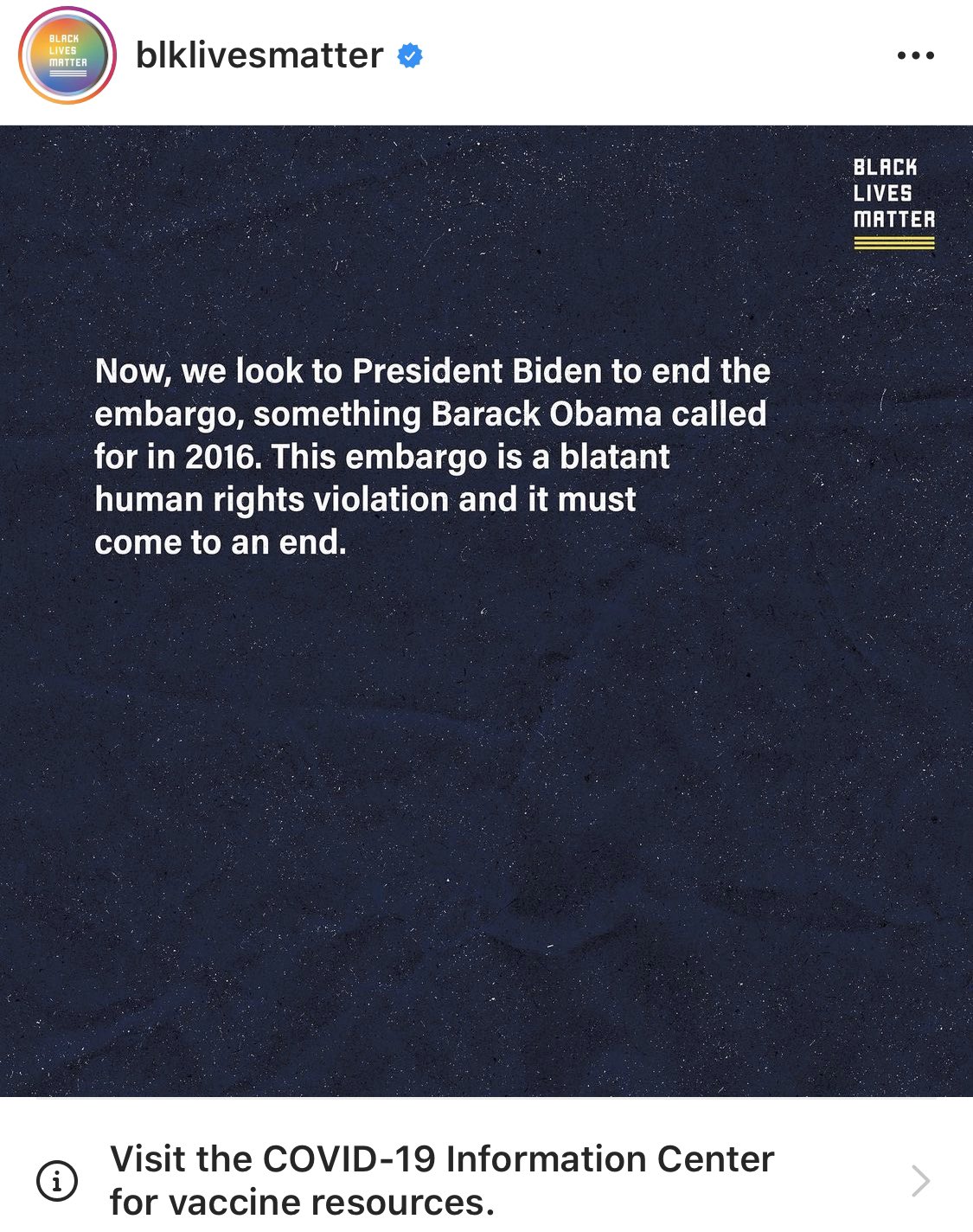 “United States leaders have tried to crush this Revolution for decades.”

That’s a clear and explicit statement in support of the Cuban Communist Dictatorship, meaning BLM stands with the brutal authoritarian regime rather than standing with the People of Cuba.

Further, this shows that Marxists are so emboldened that they are starting to openly admit their support for Communists, which is surely just the first step towards their complete adoption of a Communist agenda and desire for a Communist takeover.

This is now out in the open, and obvious to all of us.

Defenders of Freedom push back against BLM

In response to BLM confirming that it’s a pro-Marxist, pro-Communist Dictatorship organization, those who love freedom pushed back:

“”Cubans’ right to choose their own government” has nothing to do with the government that is subject to the embargo.

Mozambique? A Marxist government that persecuted churches, plunged the country into a civil war & made a third of the population refugees? That Mozambique?”

“So how much of the American establishment last year went to bat for an organization that is quite predictably defending an oppressive communist regime?

“Assata Shakur is a an FBI Most Wanted Terrorist and cop killer.

The fact that BLM continues to support her should tell you all you need to know about this horrible organization.”

“Deplorable this organization has chosen to stand with the oppressive dictators who have murdered and enslaved innocent Cubans of all colors since 1959.

The people responsible for ALL the death and misery in Cuba are the mostly white men who
@Blklivesmatter has now embraced.”

“Disgusting! Despite the Cuban dictatorship’s murdering and beating of protestors (many of them Black), BLM’s statement on Cuba….condemns the US, praises the Castro regime, and makes no mention of the atrocities being committed by the dictatorship. #SOSCuba #PatriaYVida”

“Very revealing that these organizations are releasing statement openly parroting the anti-US talking points of the communist regime that the Cuban people are risking their lives protesting against.”

“This is a really, *really* bad take. Supporting a dictatorship is the opposite of supporting “Cubans’ right to choose their own government.””

BLM’s now open embrace of Cuba’s Communist Dictatorship and confirmation of being a pro-Marxist, pro-Communist organization makes it clear that no politician can have any credibility if they support BLM or take part in BLM events.

Indeed, politicians who do so are in fact incredibly dangerous.

We wouldn’t let our politicians embrace openly-fascist organizations, and we must have the same zero-tolerance attitude towards anyone who embraces Communist Dictatorships.

Those who embrace Marxism and Communism are telegraphing that they plan to impose a dictatorship here in Canada.

That’s why the dividing line here is between Marxism vs Freedom.

The idea of countries like Canada as democratic capitalist nations is under attack by those who want to impose Communism.

And make no mistake, it would be imposed, not ‘chosen.’

After all, why do free elections completely disappear in Communist States?

Once people realize how Communists destroy freedoms, destroy economies, and destroy nations, they would do anything to get back to freedom, so Communists don’t let people have the choice to vote for someone else, and – as we saw in Cuba and other Communist States – don’t want to even let people leave.

We need to acknowledge the truth, and our society has to become much more discerning in seeing the real agenda of organizations like BLM.

We are increasingly seeing how Marxists hide behind politically correct names, and this is a tool of manipulation.

After all, who would ‘dare’ to oppose an organization called ‘Black Lives Matter,’ since opposition would be claiming those lives don’t matter, right?

That is of course absurd, but that kind of language manipulation works on many people, who are scared of being demonized or punished for being ‘out of step’ with the politically correct narrative.

Unfortunately, many people simply wait to see which group seems more powerful and dominant, and then goes along with that one.

Which is why, when Marxists hide behind names like ‘Black Lives Matter,’ those of us with strength and courage must fight for the truth and help people understand what is really happening.

The Free nations of the West are under attack, and Marxists are on the march.

It falls to us to defend the legacy of freedom we inherited, and ensure it survives.

S.A. Muslims & Blacks & Jews – Why Whites should focus as a group on ourselves ONLY…

12th December 2019 jlamprecht Comments Off on S.A. Muslims & Blacks & Jews – Why Whites should focus as a group on ourselves ONLY…

USA BORDER PROBLEM: Pictures from Arizona — A MUST SEE For all Environmentalists.

26th November 2019 jlamprecht Comments Off on USA BORDER PROBLEM: Pictures from Arizona — A MUST SEE For all Environmentalists.

Photo: The Arecibo Telescope Has Suffered a Fatal Collapse, Smashing It Into Pieces

9th December 2020 jlamprecht Comments Off on Photo: The Arecibo Telescope Has Suffered a Fatal Collapse, Smashing It Into Pieces

Attention: Important note from Jan… If you are waiting for me to contact you…

The Problem with Leftism in America is … JEWS! – Comments about President Nixon

Canada: COVID HELL: BC Nurses Suffer Heart Attacks After Being Vaccinated. Adverse reactions and deaths aren’t being reported because the paperwork is prohibitive.

Only in South Africa: Black soccer star is murdered by Blacks for theft…

America had lots of POW Camps filled with Germans…

Photo: USA: A Concentration Camp for Germans in America

Video: Law No Longer Exists So Its Time We Create Our Own

Whites … save another White Person’s life … teach them…

The Germans are INCREDIBLE! – The Macro Trend of the European race … the path we are heading to…

S.Africa: Witchdoctor killed Albino teen and baby because he needed Magic Potions from their bodies

Black Muslims in Africa: War in Mozambique: Will the Islamic State declare war on South Africa?

Jews and Biden’s weirdos – If you have more of them…

ECONOMIC TERRORISM: U.S. Treasury says store shelves will remain empty until everyone gets vaccinated for covid

Whistleblower: FDA and CDC both know, but won’t admit, that 90% of covid patient hospitalizations are the full y vaccinated

WARNING: Russia: Putin and the Jews …