[So far I think the reaction is over the top. I'm wondering if the Jews aren't trying to instil fear and panic needlessly … I'm not going to cry me a river over these losses caused by panics. I think the world has become far too feminine and Jewish. Every tiny little issue is overblown. We've not even seen 1 million dead out of well over 7 billion people, and panic has been pumped out across the mass media. I think the Jews want everyone to focus on this.

The markets don't seem to be falling hard. Remember MONEY SUPPLY is going through the roof as junk, fake, credit money is invented out of thin air everywhere, especially on stock markets in derivatives. So you're seeing a small fall in an enormous, utterly over-bloated (Jewish-bloated?) market.
10% market crash? Let's see… I want to see all things CRASH! Its time to say goodbye to Jewish Monopoly Capitalism. Even Professor Quigley said that as of the early 1900s that we were in MONOPOLY CAPITALISM mode and he saw it as a threat to civilisation. I will discuss him more later.
And remember, the SUPER RICH & JEWS are … TOO BIG TO FAIL!!! We will be paying for their failures. Jan]

The plunge in global equities has wiped out more than $5 trillion in value, or equivalent to nearly Japan’s annual GDP.

On Thursday afternoon, Guggenheim’s Scott Minerd said, “this is possibly the worst thing I have seen in my career… it’s hard to imagine a scenario in which you can contain the virus threat,” adding that “Europe and China are probably already in recession and US GDP will take a 1.5-2.0% hit.”

Guggenheim’s Scott Minerd says the coronavirus crisis is possibly the worst thing he’s ever seen in his career: “This has the potential to reel into something extremely serious” 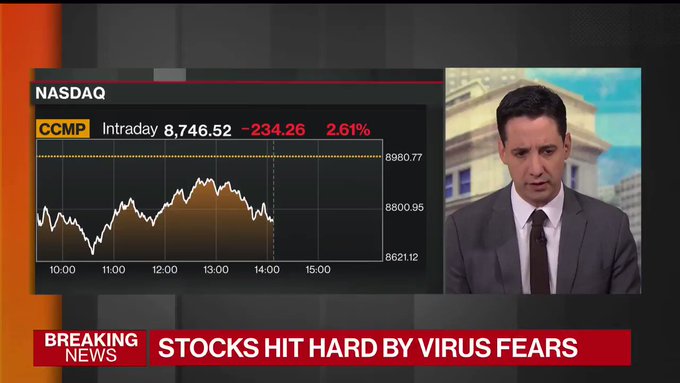 253 people are talking about this

MSCI ACWI is a market capitalization-weighted index with broad equity market exposure across the world, plunged 10% in the last five days, its biggest drop since August 2011…

The Dow Jones just saw its fastest collapse from an all-time peak since 1928, just ahead of The Great Depression.

Perhaps record high valuations are unsustainable after all…

As for the Federal Reserve’s ‘Not QE’ last-ditch effort to prop the stock market up last fall, all equity gains have been erased.

As we noted yesterday, the worsening global threat from the virus prompted Goldman Sachs to revise its earnings growth story for 2020:

“US companies will generate no earnings growth in 2020. We have updated our earnings model to incorporate the likelihood that the virus becomes widespread. Our revised baseline EPS estimates are $165 in 2020 (previously $174) and $175 in 2021 (previously $183), representing 0% and 6% growth. Our reduced forecasts reflect the severe decline in Chinese economic activity in 1Q, lower end-demand for US exporters, supply chain disruption, a slowdown in US economic activity, and elevated uncertainty. Consensus forecasts imply EPS will climb 7% in 2020 and 11% in 2021.”

But we give the last word to NorthmanTrader.com’s Sven Henrich, who highlights the real tragedy in all this…

…the real message will likely get lost in all this. Most likely the popular narrative will be to blame the coronavirus as the unforeseen event, nobody could have seen this coming, this was not something anyone could have prepared for.

While that’s true on the surface it completely misses the larger point: The Fed, with it liquidity operations masked all the underlying issues in the markets over the past year. We had no earnings growth in 2019, we had multiple expansion. The bond market never confirmed the reflation trade, Gold had been rallying for months signaling something was amiss. And now the Fed left itself vulnerable to not being able to deal with a real crisis and basically openly invited people to TINA chase stocks into high valuations.

The Fed gave no warning to investors, instead it cheerlead investors off the cliff. Even last week Fed officials defended valuations and saw nothing wrong with anything adding to the atmosphere of complacency.

And now everyone will blame the virus, but not the reckless chase into stocks into historic valuations to begin with.

Which is unfortunate, because that’s the real lesson, a lesson that was already learned the hard way in 2000, but many participants are now at risk of learning again…

Global investors aren’t waiting for economic data to hit to see how bad things have gotten since the virus has sent China into economic paralysis. They are selling first and asking questions later.

America’s shocking aircraft losses in the Vietnam war: 10,000 shot down!

Video: White Technology: How Nasa’s Electric Plane Will Be a Game Changer

INSANE: The US Fed, getting ready to pump in another staggering: $2.4 TRILLION!!! – My Comments

Accelerationism is the Answer: When the White man’s steel fist hits the Jews & Blacks

From Paul Fromm: The Strange Case of Dr. Jekyll and Mr. Ford

Stupid Loser, failing South Africa at its FINEST: Eskom sends tips on how to save energy on your pool

1914: When Sikhs cheated their way into Canada & created massive future problems including a terror bombing

Lasha Darkmoon: Why It’s Important for Trump to Win

THE LATEST JEWISH TRICK: DIE ON PAPER, RETIRE TO ISRAEL!!!

What Would a Second Trump Term Mean For Foreign Policy? – My Comments

Has Trump withdrawn the USA from WHO? … and other things?

How CUNNING is Donald Trump? The Polls seem so bad …Is he CERTAIN of victory?

VERY IMPORTANT: Stunning Executive Order Enables Politicized Civil Service: Has Donald Trump pulled a fast one & changed the Govt so that the white right can win? – This critical executive order – My Comments

IMPORTANT: Jewish lies: Professional Medical perspective: Marijuana, in any form, is NOT good for you!

Video: How Biden got millions in foreign bribes (Sounds like Hillary) – My Comments

Charts: US election 2020: How Trump has changed the world – My Comments

WHITES are always THE ENEMY! Grrrr …. TikTok Says It Will Crack Down on Anti-Semitism, White Nationalism – My Comments